While goofing off at the Doll Palace [http://www.thedollpalace.com], I discovered an avatar maker that does not crash my compooper [unlike Meez]. Naturally I made Anneka and Will. I particularly like the dollmaker dress-up feature on this site, which allows you to combine elements from different dollmakers into a customized panel. That’s how I got Will into the sarong. 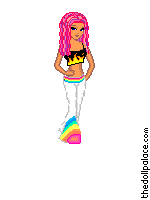 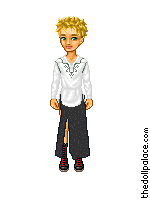 These dollmaker programs are so gender stereotyped. Most of the female figures stand in passive model-like poses or with their knees knocked, like ineffectual toddlers. They take the stereotype of childlike, slender, powerless femininity to the extreme. Meanwhile, the male figures boast ridiculously ripped physiques, and there’s a whole set of them with their hands casually draped in their crotches, highlighting their genitalia. The male dolls take the masculine ideal of strength, power and effectiveness to ridiculous levels. The dollmakers themselves don’t piss me off as much as the gender stereotypes they represent. Stupid ideas of manliness and womanliness persist today, largely at an unconscious level. Given my frustration, you can tell why I jubilated when I found that Meez had three options of kilt for the male figure.