We continue with the illustriously bad example of customizations on my first BJD, Zephque. These pictures come from his for sale posts in November, 2005. Read and weep.

Do NOT use a combination of Prismacolor and charcoal pencil to redo the eyebrows. 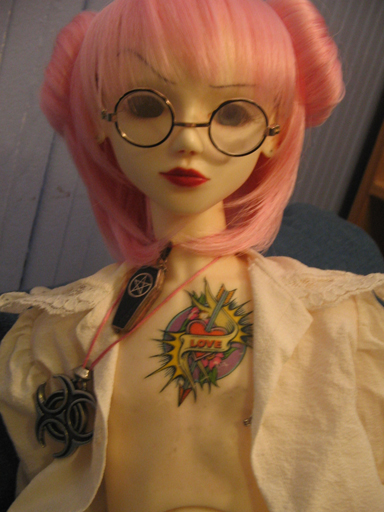 Do NOT paint lips in a single thick layer of a single color. 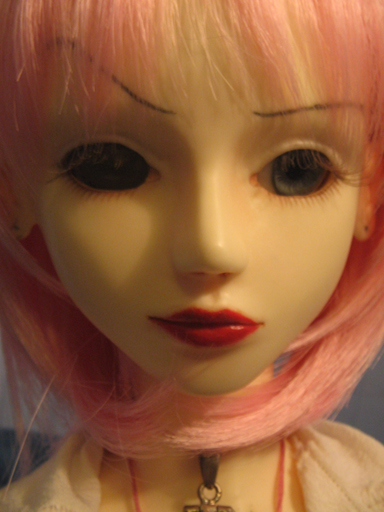 Do NOT try to take your doll’s eyes out unless you know what are doing. The first time I tried to fiddle with Zephque’s eyes, I cut myself on the stems. Then I broke one of the eyes, which I eventually scraped out, in pieces, along with some eye putty. I stuck a clear marble in the socket, and that eye never caught light again. 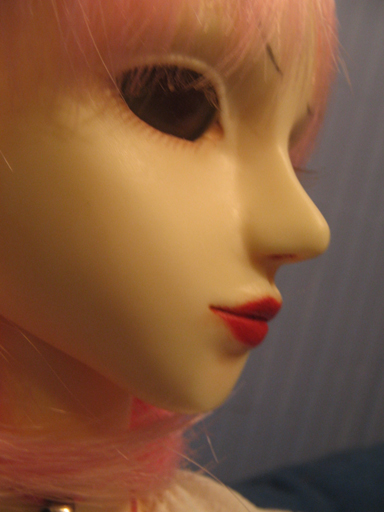 Other things to avoid:

Do NOT make your doll a cross-dresser unless there’s a really good reason for it. “I like bishie fag boys”  is not a good reason. “My character’s a sort of executive transvestite who’s seriously confused about his gender presentation because his mom wanted him to be a girl” is more acceptable…marginally.

Do NOT make your doll a vampire or something supernatural and/or undead unless there’s a really good reason for it. “Vampirism is so sexy and so, like, deep” is not a good reason. “This is my story character in resin form who explores the symbolic connections between vampirism and psychological deviance” is okay…maybe.

Do NOT give your doll a name involving apostrophes, unorthodox use of capitalization and/or gratuitous diphthongs. “Because it’s cool” is not a good reason because it’s NEVER COOL to call your doll something like Zephque d’Amaranth. Try something like Sardonix Sanguinarius instead.

I think Sardonix needs a NO BISHIES T-shirt, like the NO SMOKING sign, BISHIES with a line through it.

Diatribe aside, I retain much fondness for Zephque. He helped to catalyze my interest in BJDs, photostories, Love Has Fangs, photography in general. I also feel some affection for the character, who was simultaneously melodramatic and brittle, sensitive and repressed. He always seemed rather afraid of himself, of admitting what he truly desired; thus he paralleled my own uncertainty at that time. Now that I have more confidence, my dolls manifest more ebullient attitudes, but I certainly don’t want to dismiss Zephque because one has to be fragile and overprotective before one flourishes in flaming fabulosity [if that’s not a word, I made it up].