Hulu has the entire run of Alfred Hitchcock Presents, 2 seasons of 30-minute “playlets” that compare favorably to one of my favorite shows, The Twilight Zone, only with all the thrills, chills and twists coming from psychological exploration, rather than science-fiction and fantasy elements.

For example, the pilot, Revenge, features a man performing a vigilante beat-down on the man in the grey suit who supposedly assaulted his mentally disturbed wife. After he brains the guy with a wrench, the man and his wife are driving along in the car when his wife identifies another man as her assailant, leaving her husband with the OH SHIT!!! realization that his wife’s attacker lives inside her head, rather than outside. This suggestive study of creeping delusions is made all the more disturbing by Vera Myles’ profoundly monotone, numb performance as a woman who has overdosed on pain.

Since I love TV treatments of dolls, I especially like And So Died Riabouchinska. It stars Claude Rains as a ventriloquist suspected of murdering a juggler who used to perform with him. Matters are complicated by his obsessive love for his dummy Riabouchinska and Riabouchinska’s irrepressible honesty as evidence mounts against her owner. In a Twilight Zone ep, the doll would be some magical spirit of righteous truth-telling, but, in Alfred Hitchcock Presents, it’s very obvious that the ventriloquist is talking for her; you can see his lips moving slightly when he’s especially perturbed. I actually find the Alfred Hitchcock Presents treatment of out-of-control dolls much more horrifying and heartbreaking. Riabouchinska represents the best qualities in the ventriloquist — his honesty, devotion and creativity — but, by externalizing them in an idol-like figure, the ventriloquist divorces himself from his strengths, as if he has cut out his moral compass. In the end, when Riabouchinska dies [that wasn’t a spoiler because it says she dies in the title], her silence becomes the tragic marker of a man who, in dividing himself in two, ended up breaking himself. Pretty awesome. 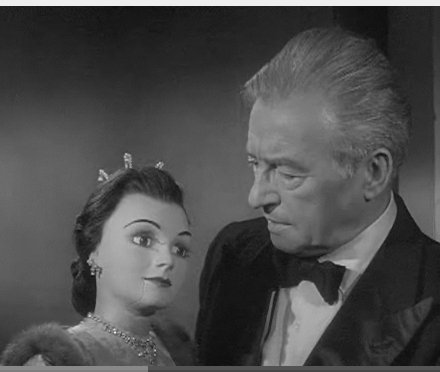 Rains’ performance really sells this one; it’s clear that the ventriloquist obviously has SERIOUS problems, but Rains plays his passion for Riabouchinska and his alarm at Riabouchinska’s truth-telling in a rather understated way, as if the ventriloquist is reacting to another person [not a dummy]. Rains’ naturalistic style makes his character’s mind transparent enough for the viewers to feel sympathy toward him, even if we don’t understand why he is so attached to Riabouchinska.

In passing, I must say that the prop masters outdid themselves with Riabouchinska. I’ve gone my entire life hating all ventriloquist dummies because of their huge lower jaws and spinning, scrawny necks. I don’t think I’ve ever conceived of a ventriloquist dummy that was anything but a comic punching bag. But Riabouchinska, who recalls more of a figurehead or even the arch, aerodynamic features of a first-edition Barbie, successfully differentiates herself from punching bag dummies. With less caricatured and more realistic features and movements, she has the beautiful but uncanny stylization of a BJD. I kind of want a Riabouchinska-like ventriloquist dummy, especially because her eyes open and close. Plus her mouth moves!!