So I decided to add a character to the LHF cast. More accurately, I decided to make a doll of an extant, but currently unseen, LHFer: Junior. Junior is Margie’s grandson, between 2 and 3 years old. Absinthe takes care of him sometimes when his parents, Margie’s daughter Laurie and Laurie’s boyfriend Johnny, are at work.

Anyway, I had a spare Kelly lying around from Kinjou, who gave me one so that I could try making the default Mattel idiot grin into something with more character. Kellys and Tommys actually have cute headsculpts, but their use among action figures is very limited because of their minimal articulation. Here you can see the swivel head and single axes of rotation at the shoulders and hips. Ugh. 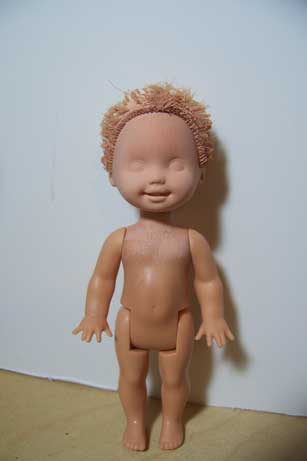 To make Junior’s posing more naturalistic and expressive, I decided to concentrate on the arms, which, for my purposes, are the most expressive body parts besides head and neck. At the very least, I wanted to add bendable elbows and more shoulder articulation. To that end, I yanked off the existing arms. 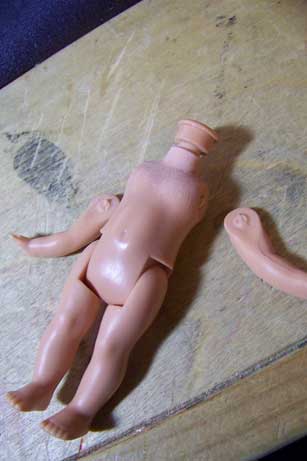 Then I drilled through the solid torso and also cut the forearms off the severed arms. 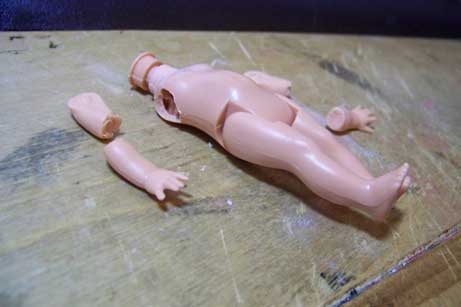 I discarded the forearms and drilled part way down into each forearm. 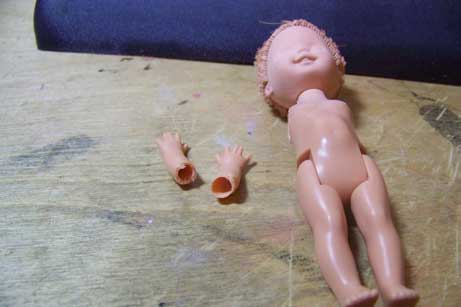 Then I threaded a doubled pipe cleaner through the torso to create bendy upper arms. I cut the pipe cleaner to an appropriate length and wrapped electrical tape around each end so that each end could fit snugly into the hollowed-out arm.

Now Junior has a full range of shoulder and elbow articulation. He poses much more realistically and fluidly, as you can see. I dispensed with wrist articulation because he is a very small doll and also because the pipe cleaner upper arms provide most of the poseability I need.

I may bulk up Junior’s upper arms with a bit of masking tape, but I’m not very concerned about the appearance. The kid’s long-sleeved shirt will cover up the pipe cleaners. Further updates follow as I give Junior paint, hair and clothes. 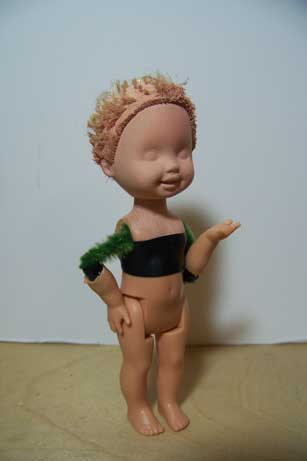