When I first saw that someone on 13doll was selling American Girl’s Girls of Many Lands dolls for a steal, one of them called out to me. Spring Pearl, portraying a Cantonese girl in 1857, charmed me with her sweet wondering look and her beautiful, bright, brocaded outfit. She told me right then and there that she was a Hun type vampire, and she needed to come home and be with Chow and Baozha and the rest of the Hun, not to mention the whole LHF cast.

While Spring Pearl was in transit from haru-jen/redjen, Kinjou helped me think up her character. He suggested that she should be named Qingting after the dragonfly pin in her hair. Imported to Chinatown as an indentured servant in the late 1850s, Qingting died of ill treatment, though Chow was trying to rescue her. He vamped her in an attempt to give her freedom in compensation for her grueling life. After a period of violent rebellion, Qingting accepted her new life, becoming an advocate and activist for children, especially abused and maltreated ones. She now enjoys telling stories, talking with kids and, much to Chow’s consternation, all forms of modern American candy and desserts. She lives her life by the guidance of Quan Yin, goddess of tranquility and acceptance.

Structurally speaking, Qingting is a GOML / 27cm Obitsu hybrid. Her neck, head, hands and feet are from the original doll, as is her outfit. I grafted the GOML parts onto an Obitsu frame so that she could be more articulated. I hacked quite some length out of the arms and legs so that the original clothes would fit her well. As it was, I gave her some socks since her pants are a bit short. Qingting went from 9" and barely articulated to 9.6" and with much of the articulation of an Obitsu. 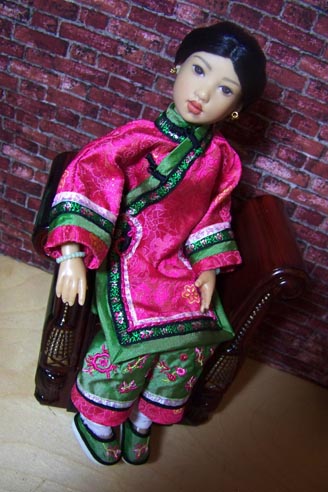 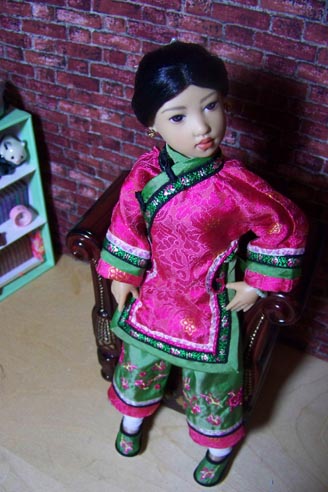