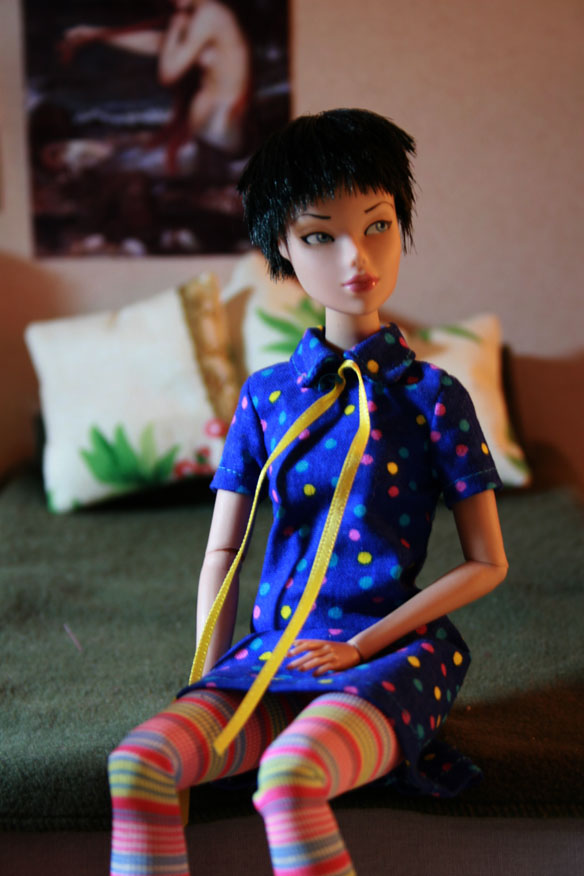 She is an Integrity Toys Monsieur Z Fly Girl with a hair cut, repaint and outfit by Andrea [of course]. I acquired her about 3 years ago. She appeared several weeks after her arrival in an LHF Meanwhile ep at Mark's Halloween party, where she won first prize in the dessert contest for her haunted castle.

Then she sat around for a long time, although she did go to doll club once. When I hit Too Many Dolls: The Reckoning earlier this month, N'Yenya got posted on the Doll Page Show and Sell listings. She actually sold very quickly, but the doofus purchaser never provided his mailing address, so I refunded his money, marked her up an extra $10.00 and relisted her.

In between messaging the doofus buyer, though, I brought N'Yenya to work and admired her sitting around with some other dolls. Momentarily discouraged that she might actually escape, I was relieved when the doofus buyer did not wish to pursue the transaction a second time. I was reappreciating N'Yenya now and actually wanted her to stay.

While I've been scrutinizing N'Yenya, I've also been mooning over August, my Buddy Doll April, who is arriving tomorrow. A few days ago, I noticed a strong similarity between N'Yenya's and August's sculpts: same pointy chin, same skijump nose, same wide eyes with exaggerated lashes, same pursed smirk. You'll have to take my word for it until I get some good pictures of August, but they coincidentally look like identical twins in different scales and materials! It's pretty awesome. She's definitely staying.

Now I want to dress them alike so that N'Yenya can be August's doll and they can do matching doll/owner cosplay. :p

And now I know who got Andrea’s MZ lady I adore from the archives.