About a year ago, Doctor Z, the Zombieville denizen who diagnoses Isabel with spondis and tells her about the condition and the community of people who have it, started off as a Hasbro AA helo Jane with a very purple faceup. 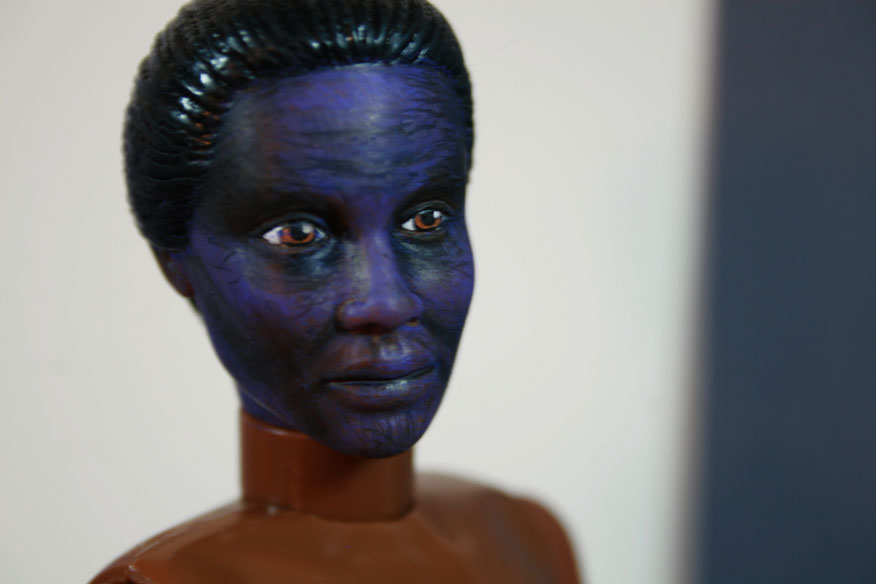 Since the purple colored pencil smudged, I redid it with acrylic paint and gave her a mohair wig. 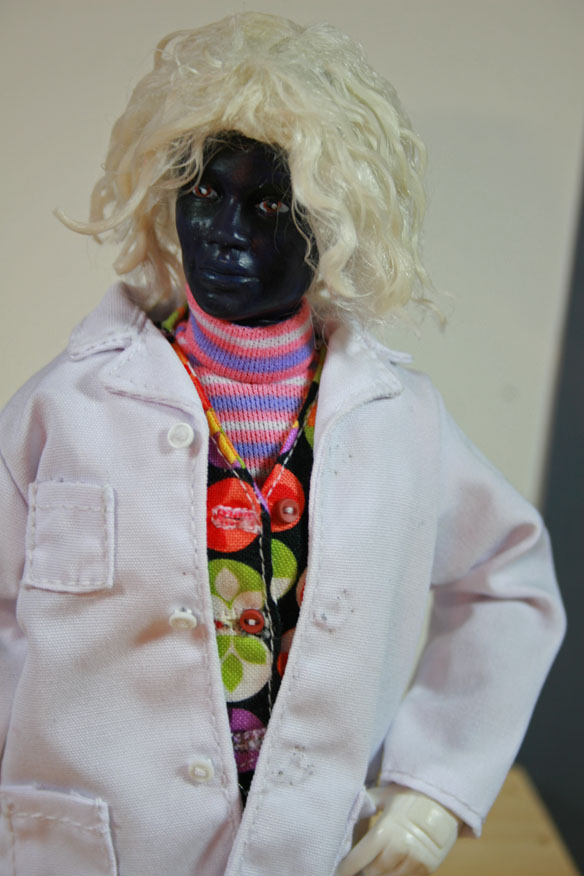 I proclaimed her done, but remained dissatisfied. Last June, I made another attempt on her faceup and wig. This time she had a dark brown base for her complexion and grey faux fur for hair. 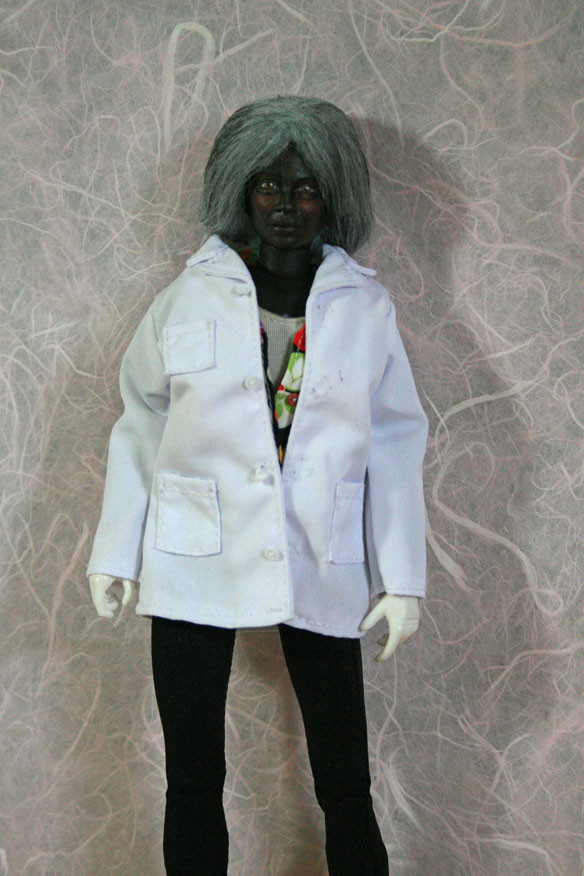 Done? Not quite. She needed kinky hair, so, in August, I tried to make her some out of white poodle shag faux fur [bottom picture]. 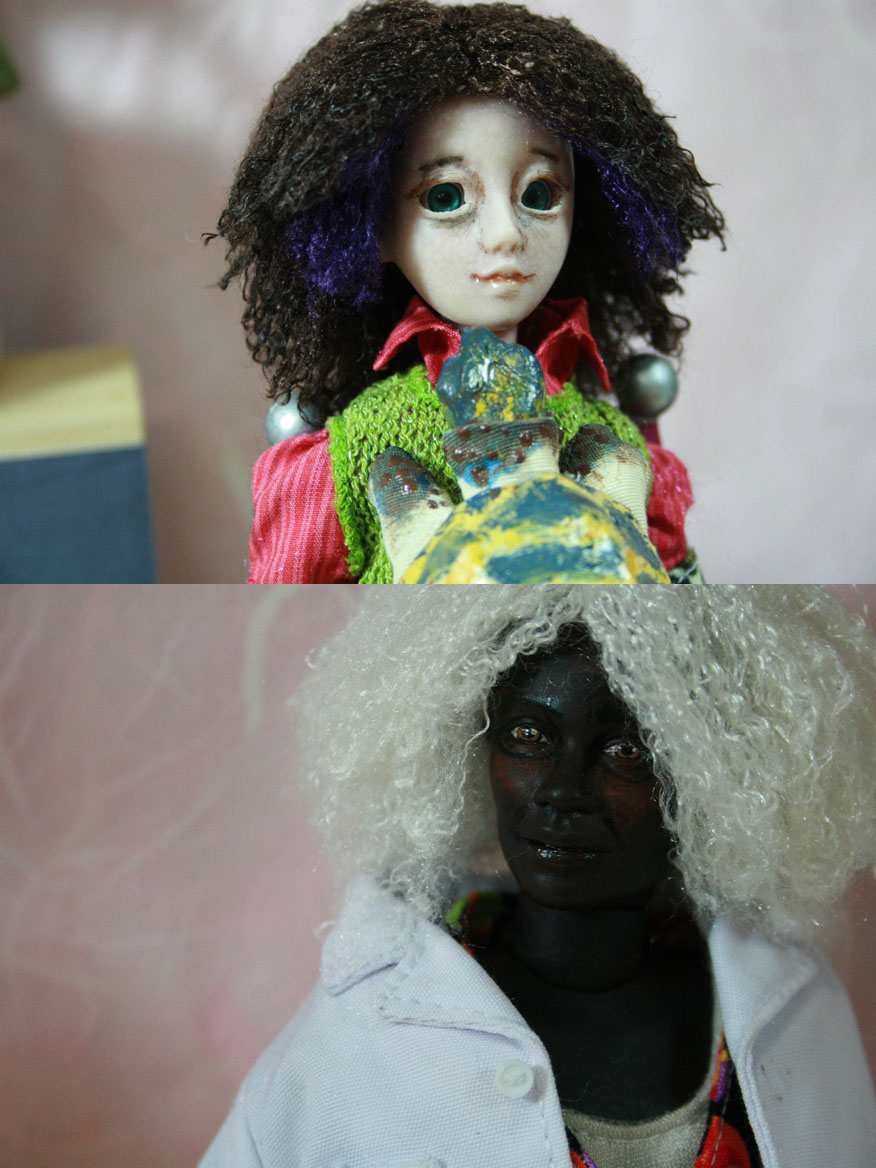 Of course she wasn’t finished, though. Like Peter, Doctor Z was proving to be one of those characters that I struggled mightily to get right. I did her over encore une fois, completing this iteration during the weekend.

This version of Doctor Z has an AA Triad Alpha head. I modified it extensively by carving out the temples and the jaw with my Dremel. The hard, stiff plastic responded very well to my rotary tool. I was going to sand the rough mods down, but I figured that any unevenness can be attributed to the fact that Doctor Z has a degenerative condition that causes her to waste away and lose various body parts. So I left her the way she was.

After reshaping the head, I pulled out the hair, trimmed the remaining clumps and painted the stubble white. I repainted the whole head in lighter brown with orange [rather than purple] undertones. Coincidentally, the chocolate brown paint proved almost an exact match for my AA Takara CG body. I was pleased.

Neck post required adaptation to fit the Alpha head, which has a deep neck socket. I extended the neck post by hot gluing a straw to the peg, then painting the straw with chocolate brown so that it was less conspicuous. An obvious gap remains between end of neck and base of head, but I don’t care enough to do anything about it.

Doctor Z’s hair is the same wig that I made out of white poodle shag faux fur. I kept trimming it to even out the style, and this is what I ended up with. By the time I was working on her hair, I felt quite tired of the whole project, so I styled it by hot gluing sections to her scalp. 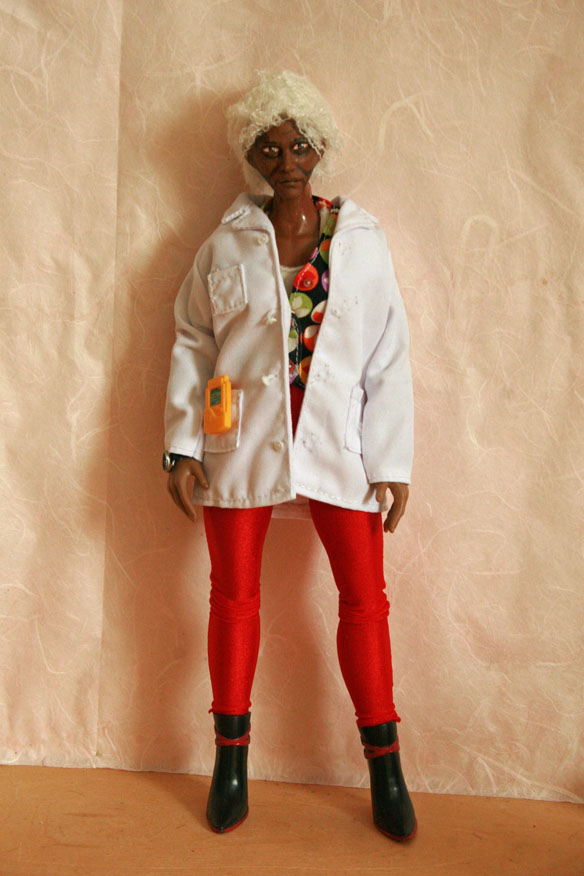 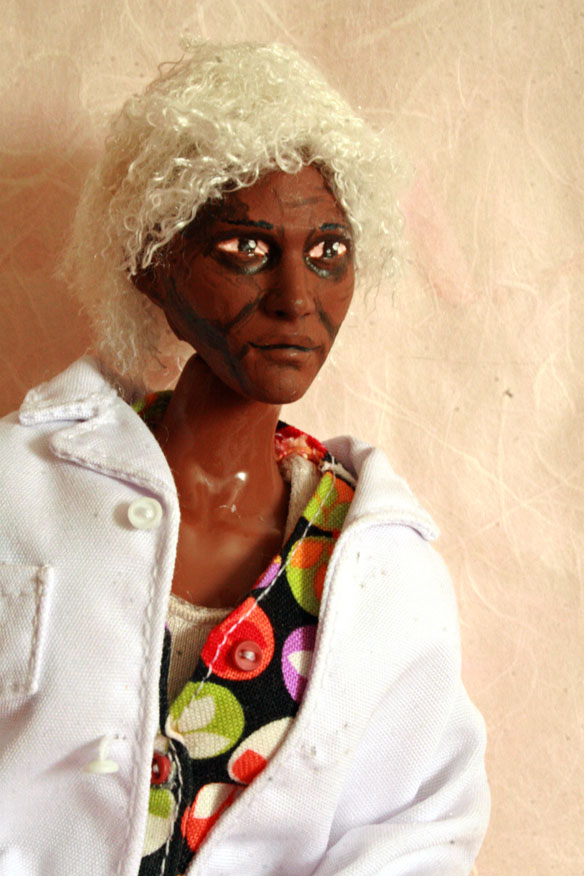 I’m not sure if she’s done yet, but this version is leagues better than the previous ones. While earlier iterations had their haggardness painted onto a robust headscupt, the latest version is engraved and remodeled by her age and condition. Though not as weathered as Lumberjack, she nevertheless looks old and/or tired.

I also like this version better because she’s not a light sink. The dark, deep, cool colors of the first two iterations made them difficult to photograph, especially in combination with white hair, white lab coat and pale pink background. All the white still tends to wash out Doctor Z’s face, so I may have to reconsider the lab coat. However, this draft is easier to capture on film than the earlier ones.

This entry was originally posted at http://modernwizard.dreamwidth.org/1627886.html. You can comment here, but I’d prefer it if you’d comment on my DW using OpenID.