In no particular order:

Just to illustrate my stupendous accomplishments, here’s Jareth, being a gleeful dork as usual. ^_^ 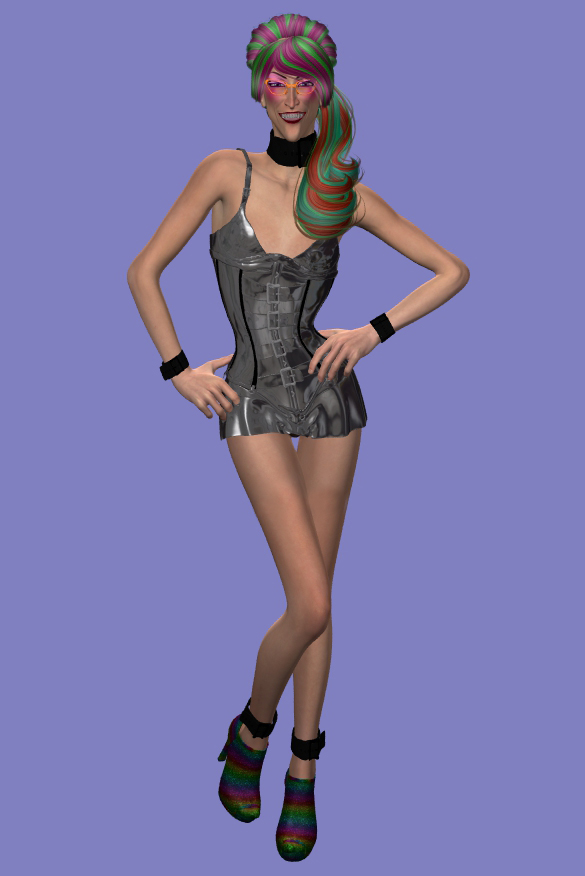 Credits: Usual sources for Jareth’s morphs, texture and glasses. Hair: Glam Ponytail for Dawn by Hivewire3D. Texture uses a free tile by MSTene, altered in Photoshop Elements by me. Jareth and I both think it’s so cool how the ponytail came out in different colors! I didn’t intend that; it just happened serendipitously. Collar, wrist cuffs and ankle cuffs from LilFlame’s Heavy Cuffs for V4. Corset, bra and dubious excuse for a skirt from LilFlame’s Buckle Corset for V4 set. Underwear [not shown] from Lululee’s Lacey [sic] Lingerie for V4. Shoes from dx30’s Shoe Pack for Genesis 2 Females, shaded with one of Fisty’s freebie Fisty’s Rainbows.

Expression by me, mostly from AlFan and smay’s custom expression morphs, Temptation and Drama for G2F, a wonderful addition to my runtime, with a wide variety of smiles, smirks, eyeball rolls, shit-eating grins, etc. Pose from Sedor’s BWC Fashion Poses for V6, which I got as a Platinum Club Plus freebie earlier this week, along with Sedor’s BWC Runway. Clearly I need to have a digital fashion show! [Jareth: "Fashion show whooooooooooooooo!"] Background by me.

This entry was originally posted at http://modernwizard.dreamwidth.org/1652956.html. You can comment here, but I’d prefer it if you’d comment on my DW using OpenID.