After languishing in pieces for over half a year, Yamarrah now has a functional upper torso!!! Today I took her new torso [specially cast by Mirodoll to match her Iplehouse realskin head] and modded it to accept her original Domuya arms. I filled in the large shoulder sockets with some Aves Apoxie Sculpt so that they would more snugly accommodate her shoulder balls, which were on the small side. I managed a snug fit by layering Aves Apoxie Sculpt on the inside of each socket and then, after letting it stiffen for about 45 minutes, rolling the shoulder ball around in the Apoxie Sculpt to create a new socket, perfectly shaped for her shoulder ball.

When I stuck Yamarrah on her Domuya body, I filled in her deep neck socket. I thought that I would have to ream some of this out when transferring her to her new Mirodoll torso. Before making such changes, though, I tested the fit of her head on the neck without neck socket deepening. The fit looks fine to me, so that’s one less mod I have to do.

The most time-consuming and involved set of mods yet remains, however. I have to make the bottom socket of Yamarrah’s Mirodoll upper torso mate with the top ball of her Domuya abdomen piece. This is definitely a subtractive mod, but I do not know if I will ream out the upper torso or shave down the abdomen.

In any event, here’s Yamarrah temporarily back in action after a long absence, contemplating, as usual, the source of her next creemee. The rough grey stuff around the edges of her shoulder sockets is, of course, Aves Apoxie Sculpt. Her modified shoulders do not allow her to shrug, but I don’t care because they otherwise maintain full range of motion, as demonstrated below. 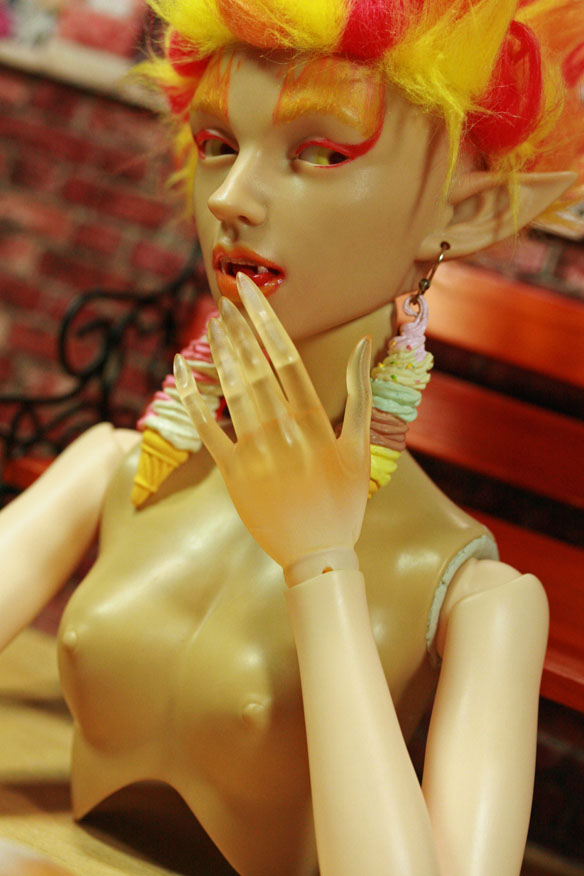 Just for the heck of it, here’s a super closeup of her faceup. I’ve decided to do it over with acrylic paints and much brighter, more saturated colors, except maybe her teeth, tongue and inner mouth. But that’s after I finish her body and put her back together again. 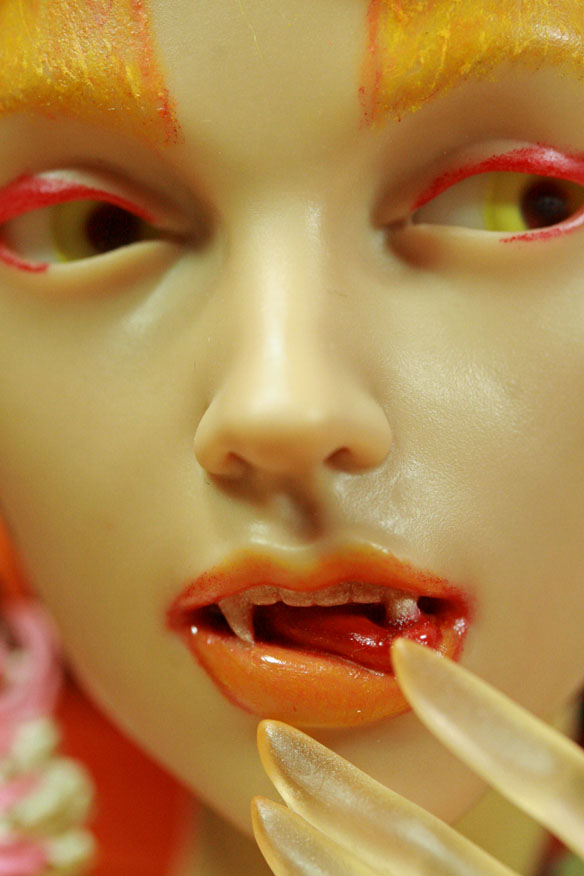 This entry was originally posted at http://modernwizard.dreamwidth.org/1653310.html. You can comment here, but I’d prefer it if you’d comment on my DW using OpenID.