I have a character in the mini universe, Julian, an inventor and tinkerer who steampunks out mobility aids. She has spastic hemiplegia, so she uses a power wheelchair. She can make sounds, but is mostly non-verbal, so she communicates largely by her tablet, where she types phrases, which are then translated with text to speech. Because she moves mostly only her right hand and her head, she plans steampunk mods and then enlists help in the construction. She has been working most recently with her sister Heidi, but Heidi talks over her so frequently that Julian has Yakkety yak, don’t talk back! on speed dial so she can interrupt her, so they don’t get along well.

Anyway, Julian is obviously really cool, and I’ve long wanted to make a 1:6 scale steampunk power chair. Furthermore, this weekend I was talking Zombieville, zombies, and neurodiverse and disabled characters with Nataluna. We got onto Monster High and agreed that our favorite character is Ghoulia Yelps, the deeply nerdy, intelligent, awkward, canon autistic zombie. I regretted not getting a first edition of her when she was initially released, but I’ve always held off on Monster Highs because the big-headed aesthetic doesn’t work for me.

All the aforementioned elements came together, and I decided to do a realistic doll version of Ghoulia for Zombieville…or wherever the hell she wants to be. Named Julia Phelps, she would have as much of Ghoulia’s style as I could realistically replicate on a person who obviously needs help dressing and adorning herself, plus Julian’s personality, steampunkery, and spastic hemiplegia.

So far I have…the head. Mattel’s 11″ She-Ra figure has the perfect pointy features, so I got one, despite limited edition prices. She’ll need a repaint, especially of the eyebrows, since I love Ghoulia’s quizzical ones. She’ll also need some blue hair, which I can easily produce with a faux fur wig.

I’m wondering what to use for the body, as I have a very specific body type in mind for her. I want her to be frail, spindly and underweight, with narrow limbs. Her head should seem slightly large for her neck. I also have a very specific vision of her posture in her chair — head tilted to the right, left arm bent up to her chest with her wrist cocked and hand clenched, torso slanting to the right, knees bend and also pointing to the right — so I want a body that can fold and hunch into this position.

Oh yeah…also of relevance to the custom is that she drools, so I think I will put some glossy varnish coming out one side of her mouth. She will also have a wrist band to wipe away saliva.

Original edition of Ghoulia being incredibly cute below. 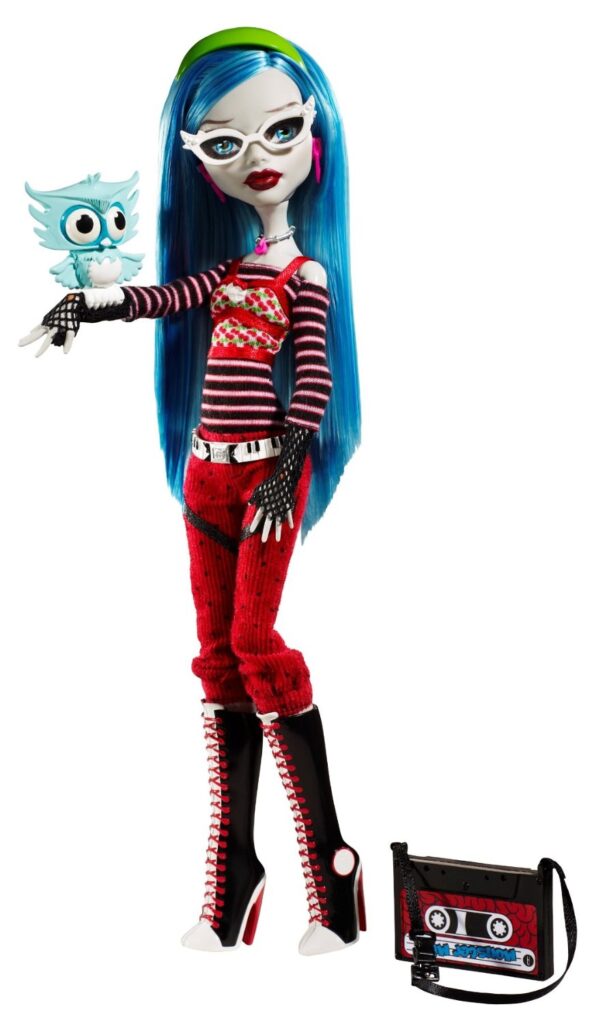