Brandeis visited the First Parish Cemetery in Cambridge today. Founded in 1636, the First Parish Church has an adjoining cemetery that’s crammed with the coolest variety of sarcophagi and headstone iconography in the metro area. Today she and I are just focusing on a part of it: the different types of sarcophagus.

Say “sarcophagus,” and your average person probably thinks of the ornate coffins of ancient Egyptian pharaohs. Few people know that sarcophagi appear in cemeteries across Europe and this continent as well. Obviously not as elaborate as their ancient Egyptian counterparts, these Puritan sarcophagi nevertheless boast several interesting varieties and a stark beauty that is only enhanced by harsh winter light. Commentary below each photo. 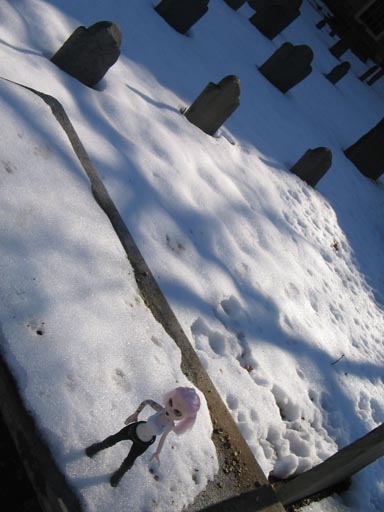 Brandeis and I first checked out a low-slung “trunk” sarcophagus, basically a big flat stone raised up from the ground by several layers of bricks. Please note that the sarcophagus is completely solid; the dead body is below it. Don’t think of the sarcophagus as a container, but as a big rectangular gravestone lying down. 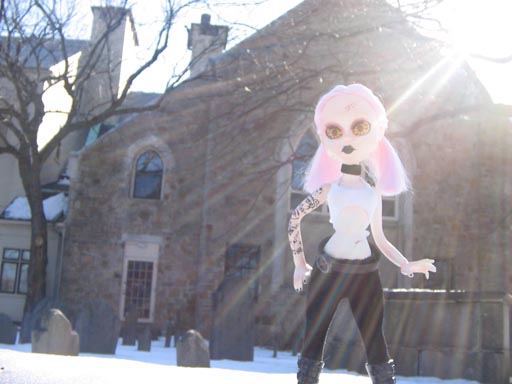 She’s standing just about one and a half feet off the ground here. 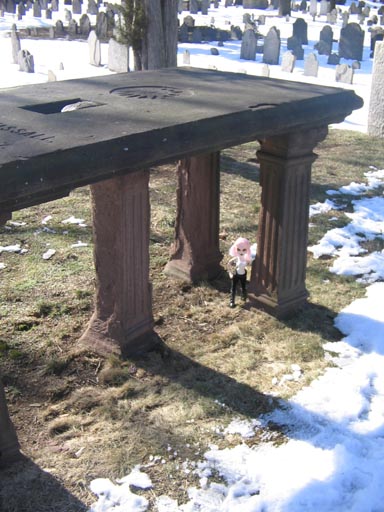 This kind of sarcophagus, the “table” type, clearly shows that the sarcophagus is just a vertically oriented tombstone. You can see the stylized sun in the center of the “table top,” standing for resurrection and eternal life. The epitaph below it is just peeking out the left-hand side of the picture. Brandeis hangs out next to one of five columns [which is weird because usually there are six] fluted columns supporting the top slab. It’s about three and a half feet off the ground. 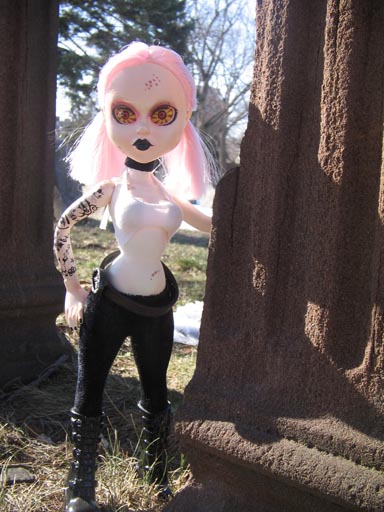 The table sarcophagus allows for much more delicate detailing than, say, a trunk sarcophagus, but it also exposes the legs to greater erosion. 300+ years can really deteriorate sandstone. In the previous photo, you can see that the slate is surviving much better. 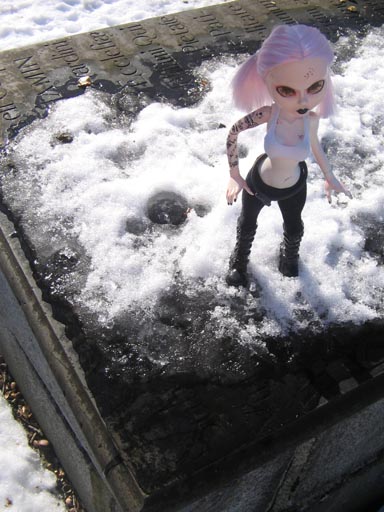 Here’s another trunk sarcophagus, bigger than the first [maybe about two and half feet off the ground]. Usually only renowned or rich people got sarcophagi after death because they were the only ones who could afford them. 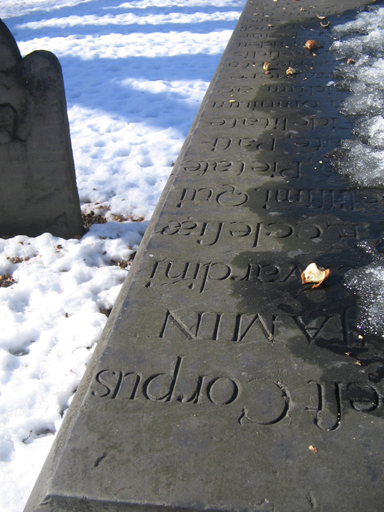 Like many epitaphs in First Parish Cemetery, the epitaph on this sarcophagus is written in Latin. Perhaps you can make out the upside-down word “corpus,” which means “body” and is the root of our English word “corpse.” This stone, from what I could gather, tells about the lineage, education and worldly achievements of a clergy man, probably a professor or president at Harvard. [There are quite a few in this cemetery. It is, after all, in Harvard Square.] This is my favorite photo of the set.

Brandeis has a very, very nice rack!! And on the topic of Corpus, the Swedish word for raven is ‘korp’; do you think there is any linguistic/etymological relation?

I wonder… considering ravens were notorious for hanging around after battles and death. Ravens are the symbols for the Morrigan, the three faced goddess of death and battle of the celts? I think the celts… I know she’s irish at any rate. And a group of crows are a “murder”…

The Norwegian term for “raven,” “korp,” is NOT derived from the Latin “corpus.” It’s actually derived from the Latin “corvus,” which means, amazingly enough, “raven.” V, B and P are often interchangeable in linguistic development, which explains the shift to the Norwegian “korp.” While there is no common Latin root for “raven” and “corpse,” the similarities between “corpus” and “corvus” probably helped all the death and mortality symbolism associated with ravens.

This concludes our Dork Broadcast. Tune in next time…

This from someone who just wished a Korean person a “Happy Chinese New Year”….

My confusion is at work again. Sorry. I should have referred to the SWEDISH word “korp” from “corvinus,” etc.

I love the series, you do take wonderfully detailed pictures! The last one is the best, I have to agree 🙂