As an extension of my interest in dolls, I've long had an interest in mannequins. For example, about 11 or 12 years ago, when I lived in small quarters in Somerville, MA, I purchased a 1950s mannequin off Ebay.

I named her Mick. She was made of wood pulp composite and had a nice old musty smell. She had a lovely, small, foreshortened head with uptilted features and knowing, side-glancing eyes.

I customized her by giving her a mohawk of blue and purple and gluing stars over the areas where her skin paint had chipped. I also gave her rhinestone studs around the border of her pinnae. Then I dressed her in all the awesome clothes that I could never wear myself. Naturally, she also dressed as Jareth, with a white blouse, my black velvet cape, the pants seen below [har!], an artificial bulge and an appropriate wig.

She was classy, demanding and vulgar at the same time, rather like Frank from Rocky Horror, as you can tell from the photos below. Incidentally, the button on her pants says "I heard it was come as you are, so I came in my pants." 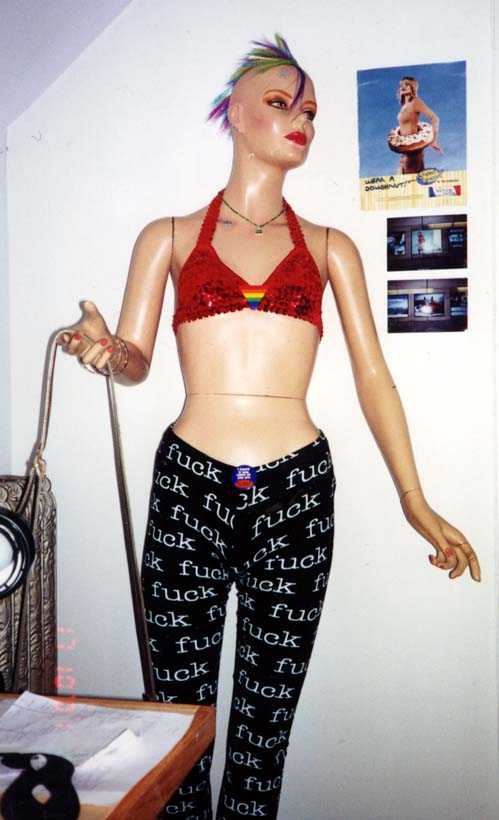 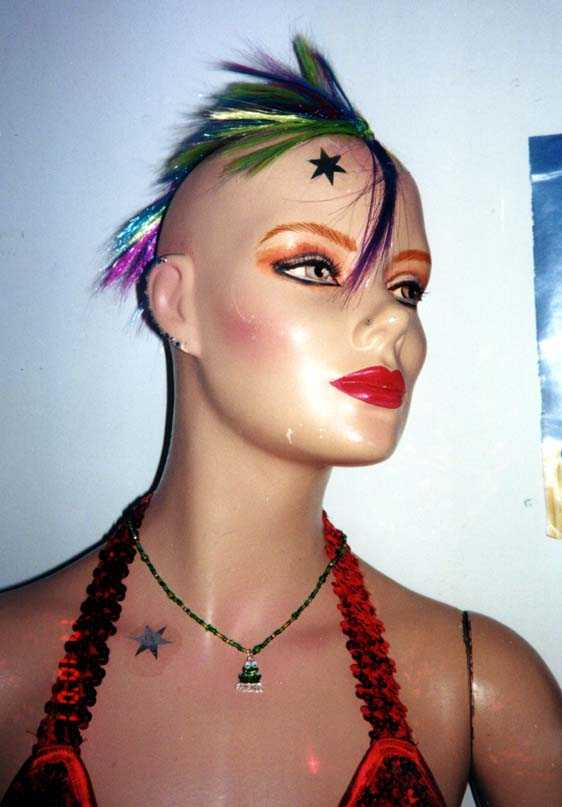 I no longer have Mick, as I got rid of her when we were moving apartments from Somerville to Cambridge in 2005. I was in one of my phases where I thought that having dolls was rather silly and impractical, especially life-size ones. She went out on the curb on trash day, but not before crabbily socking me in the mouth with her arm when I was disassembling her. I am confident that she went on to provide enjoyment for someone else, though. Like many desireable items left out on trash pickup days in our college-student-heavy neighborhood, she quickly disappeared before the garbage trucks came. No doubt she ran off with someone to become yet another moody and glamorous art project.

There were other life-size dolls too, such as the Styrofoam drag queen head who sported glittery rainbow eyelashes and helpfully stored my hot pink bob wig. There was also the African-American model that we discovered somewhere, decapitated, and reassembled by carefully balancing her loose head on her neck. I never named them, loved them or missed them the way I did with Mick, however.

I may no longer have Mick, but I still have my memories of her, which involve either feeling either a) deviously daring as I dressed her in flamboyantly explicit outfits or b) extremely frustrated by her limited articulation. She could swivel her arms and wrists, but that was it. She detached into just six pieces: her head + torso, two arms, two hands and then her waist + legs.

Despite Mick's limitations, I really had fun with her. Clearly, I haven't stopped thinking about her after all these years. Indeed, though I no longer have her, I have still kept the quintessential items of her wardrobe — the FUCK pants, the "came in my pants" button and the pride button — just waiting for the time when they will be used again.

Let's face it — I want another mannequin. I mean, really…did you honestly think I would be able to resist the prospect of a life-size doll that's positively cheap compared to the wads I regularly blow on BJDs? You can get a simply posed, full-body mannequin with a realistic head for between $90.00 and $250.00, excluding shipping. Compare that to how much I'm investing in my Jareth, one of my dream BJDs, and you'll see why I consider mannequins cheap.

Anyway, now that I shop around for mannequins, there are so many more choices than there were when I bought Mick. A decade ago, I sought in vain for affordable mannequins with "plus-size" figures and/or basic limb articulation and/or head sculpts that had features besides vacant eyes, overstuffed lips and square jaws. Look at some of the options that the Mannequin Store [which apparently hasn't changed its site layout since I first came across it over 10 years ago] now offers…. I could settle for the adjustable sitting mannequin in standard mannequin body type [albeit with relatively larger breasts] and then make her fatter with strategically placed polyfill.

Their category of flexible mannequins contains two types of articulated mannequins. First, they have soft-bodied mannequins with wire armatures. The key words here are "flexible," "bendable," "soft" and "wire armature," just as a note to myself, for future search term use. These come with blank heads or solid, realistic heads, which look rather small and incongruous. Anyway, they're poseable down to their fingers! Just $250.00 for a female soft body with a hard head! I wonder if you can swap the heads out…

Second, they have hard plastic mannequins with a combination of ball and hinge joints. The key words here are "flexible," "jointed" and "pose mannequin." The "pose woman," as she is called, has ball-jointed shoulders, swivel head and waist, as well as hinged elbows, thighs and knees. For some reason, her wrists do not move. The articulation reminds me of the non-Fashionista articulated Barbies. Anyway, she's just $400.00.

They also have another type of articulated mannequin filed under their sitting female mannequins. She is billed as an "adjustable sitting mannequin." She appears to have swivel head, neck and wrists, as well as hinges at the elbows. Unlike the hard plastic ball/hinged mannequins, she has definite body segments and exposed metal joints. She also has a larger rack than your average female mannequin. For some reason, she's priced at $250.00, much less than the jointed mannequins mentioned above, maybe because she doesn't have knee joints. Her combination of realism and naked, mechanical articulation really appeals to me. I even like her head sculpt. I would totally get her over the aforementioned jointed mannequins, even if she didn't come with knee joints. [If she did, I would definitely choose her over the earlier jointed mannequins.] Of course, she's sold out on the site. 🙁 Damn damn damn.

There are also a few more body shapes available for mannequins. Here's a "plus-size" mannequin with more fat on her than the standard mannequin. Tragically, she does not have a head. I can't stand mannequins without heads. They creep me out.

And here's a mannequin who's "eight months pregnant," apparently with a baby mannequin? I'm not sure how they reproduce, given their lack of genitalia.

My dream mannequin would be a "plus-size" female with  the articulation and head sculpt of the adjustable sitting mannequin, plus knee joints, and the ability to stand up or at least remain propped upright against a wall. I'm thinking that the adjustable sitting mannequin with knee joints must exist, as she's shown in the photo with knee articulation. I'll have to ask the Mannequin Store who makes her. Maybe some other place has her in stock. I will find her!

Darn dolls. I know how they reproduce now…by planting seeds of ideas in people's heads that then grow to fruition and cause greater and greater purchases.

And a standing mannequin with raw elbow joints.

I would love to have a mannequin or two, or just extra dress forms. My mom made some great costumes that I’d love to display, and I’ve seen some lovely poses for sitting mannequins that tickle me pink. I’ve considered getting one of those “My Size” Barbies, so I can put her in some of my childhood clothes. (There’s a beautiful sundress in my collection that’s just the right size.)

The examples you linked to are really impressive. I had no idea they were so articulated now!