I had the worst time with Anna’s hair. Originally I just wanted to repaint the base in royal purple, the bangs and braids in pink, her lips in raspberry and the lesions on her face in red. I had no problem doing the royal purple parts [aside for some paint leaking under the copious masking tape and onto her ears >:( ], but I struggled mightily with the pink parts.

I encountered two problems when repainting her bangs and braids. First, the dark neon green paint that she came with did not want to hide under the much lighter neon pink replacement. Furthermore, the neon pink was slightly diluted [curse you, "craft paint!"], so it kept sliding into the low parts of her hair sculpt, leaving the prominent areas flagrantly green.

I considered thickening the paint. I made a thickening agent out of corn starch and water, then decided not to use it. I looked for modeling paste in the local craft store, but they didn’t have it. My frustration increased.

I decided to dispense with the existing braids and bangs, both of which I had yanked off, and sculpt some from scratch. Unfortunately, I did this by using uncured polymer clay directly on Anna’s head. Bad idea. They clay stuck there and would not remove in one piece for curing, so I spent at least an hour undoing all my work and scraping every goddamn sticky bit of polymer clay out of all the crevices in her ears and hairline.

Having found modeling paste at another craft store, i tried mixing modeling paste and paint to then cover over all the green parts. The result looked okay, but a) it cracked and then b) it wouldn’t fit snugly back on her forehead anyway.

At that point, I threw away her bangs and braid, since they clearly existed only to mock me. I created my own bangs, as well as a ponytail for her braid hole, from small strips of faux fur. The fur, a tricolored atrocity in neon purple, pink and green, actually worked much better than I expected. The pink picks up the pink on her skirt, while the purple picks up the purple in the rest of her hair and in the stitching on her bellbottoms. Finally, the green in her hair coordinates with her green lipstick.

While I was at it, I modified the upper portion of Anna’s outfit from the last time we saw her. I gave her a cropped T-shirt with a NO BOYZ sign on it, over which is a cropped short-sleeved jacket in white faux fur with gold threads. She also has a load of beaded bracelets on her left wrist. Her pants and boots are the same. And I took off that disastrous green nail polish. Oh yeah, and her wheelchair is a Mattel Becky one spray painted black.

Clearly, she is fabulous! 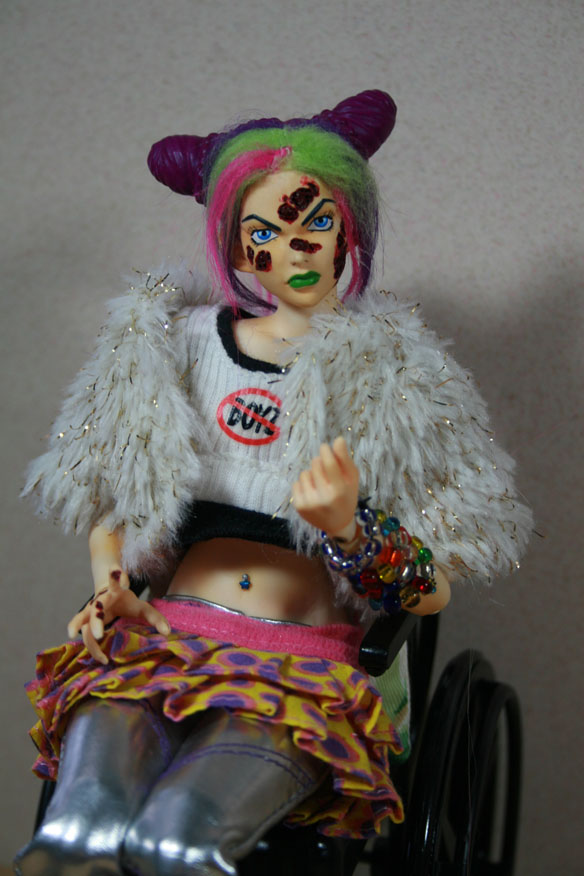 And here she is contemplating a recent acquisition: a cast iron pencil sharpener in the shape of an antique phone. I think it would look better with someone of less delicate, slender frame. 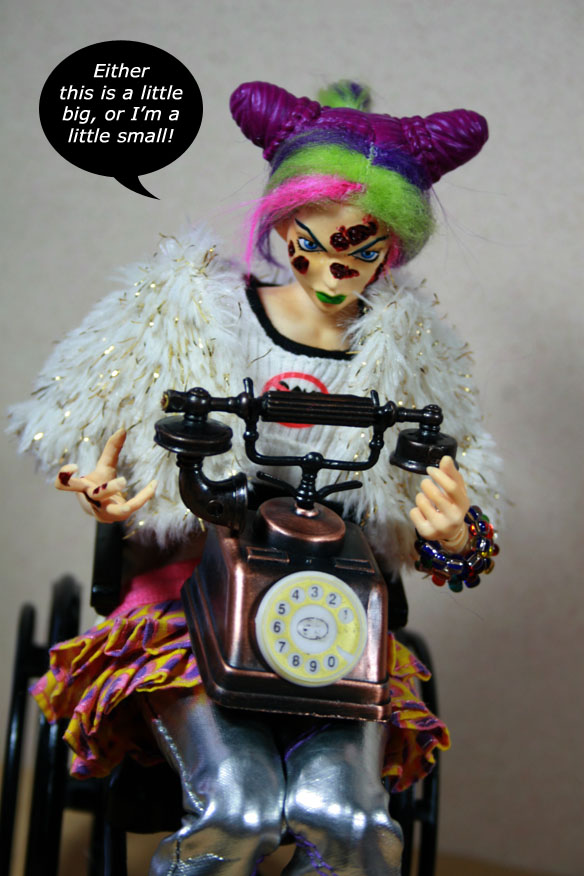 This entry was originally posted at http://modernwizard.dreamwidth.org/1433214.html. You can comment here, but I’d prefer it if you’d comment on my DW using OpenID.