I started working on Isabel’s faceup last night, but eventually swapped her out to a Soom Uyoo body, as the Elfdoll Doona Ryung body she came with was weirding me out with its childlike proportions. Though her temporary body represents a shape Isabel has never had, it certainly disturbs me less than seeing the head of a 35-year-old on a 7-year-old’s body.

Anyway, as you may recall from my previous entry on eyeball tests, I selected one of four Doona Ryung faceplates for Isabel’s. The doll came with four different expressions [shown here]: neutral awake, sleeping, kitty cat [I think there might be an angry expression under there] and pouting. I opted for the pouting one.

The pouting faceplate presented some challenges. First, the eyes were partly closed, making the sockets shadowed and dark. [That’s why I was testing all those eyes last night, looking for the lightest and most visible pair.] Second, it looked really pissed.

As an aside, I should say that sometimes pissy expressions can be versatile, representing seriousness, intensity, annoyance, anger, upset, etc., Anna being a good example. Her pissiness is conveyed largely through her downturned eyebrows, and her relatively neutral mouth makes her expression subject to a broader array of interpretations. I think the same applies to Baozha, even though her eyebrows are more obviously furrowed. I always figured that her mood was either crabby or diabolically mischievous, both of which work with her expression.

Well, back to Doona Ryung’s pouting faceplate. It was sculpted in an unambiguous pout. Even after I erased the slanted-down eyebrows, the sculpt continued to pout. The half-closed eyes combined with the pursed lips to yield an aspect of thorough disgruntlement. Isabel has never been a prickly character, even though she does tend to sarcasm, so the disgusted expression did not work.

I ended up mitigating the pout in the sculpt with the faceup. As usual, I used a limited palette of Prismacolors — PC930 magenta for the lips, PC935 black for the eyebrows, PC945 dark brown for the shadows around her eyes — and tried to make her appear less bitter with the sorry state of the world. Raising one of her eyebrows made her look a bit skeptical, while lengthening and slightly turning up the ends of her mouth made her look wry. I decided that mordant amusement was a big improvement over misanthropic disgruntlement.

Yes, I know that there are shiny spots on her face. As you’ll see in pictures below, they mostly disappear in the light shadows created by various wigs. 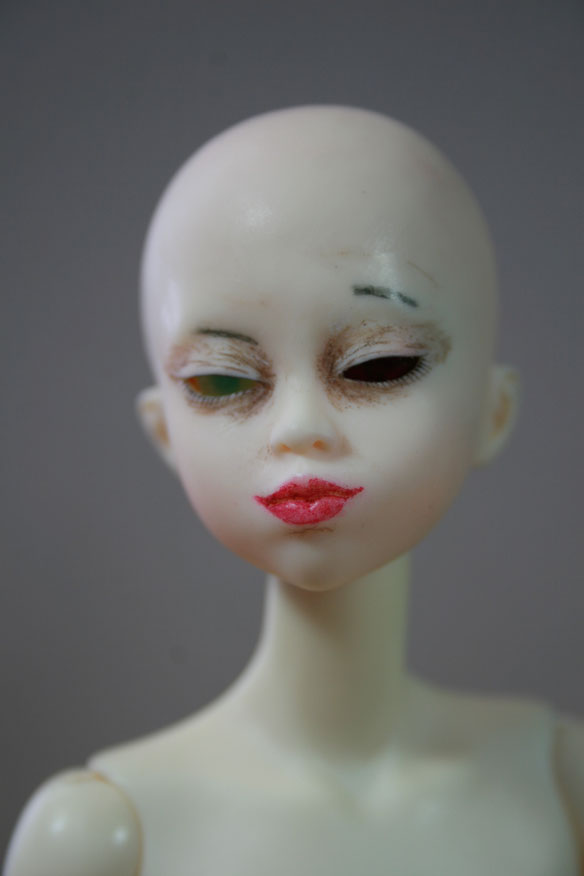 Next I prepped Isabel’s empty socket. As the story begins, her left eyeball falls out. Due to her spondis, the empty socket remains only partly healed and rather raw, so she can’t put a prosthetic in. [I have yet to make her a bunch of cool eye patches that she can coordinate with her outfits.]

To make the open wound of Isabel’s eye socket, I rolled some polymer clay into a small ball and molded it lightly to the eyewell. I fired it, then painted it with a few coats of alizarin crimson, a version of red with dark brown undertones that looks very close to the color of dried/scabbed blood and is therefore perfect for lazily portraying partly healed wounds. [I also think Alizarine would be a great name, probably because it starts off sounding kind of like my own. Also Alizarine Crimson would be an awesome drag queen name!] Then I glossed it with satin varnish and stuck it in her socket as if it were a regular eyeball. It doesn’t really show up in any of the pictures, though, because it’s a dark object in a dark socket that is further shadowed by various wigs. It is there, though, and it will show up in detail in episodes.

I tried a bunch of wigs on Isabel to see which one she’d look best in. 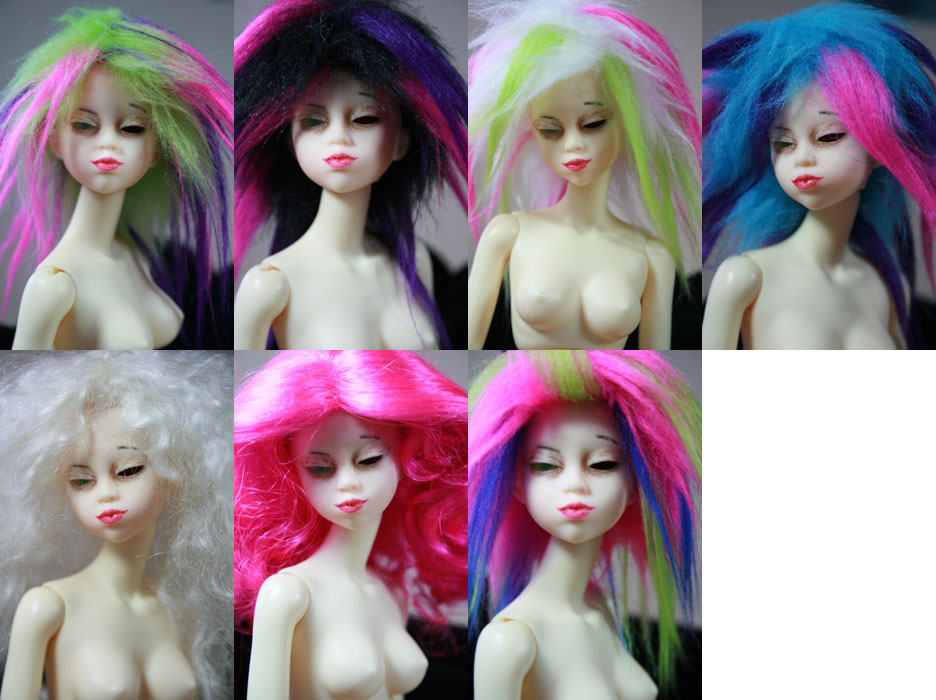 Unfortunately, she looked her best not just in a single wig, but in the entire complement of handmade fur wigs with pink in them, which are all the ones in the top row, as well as the last in the second. :p She really rocks the last three in the first row, but I prefer her in the white/neon green/pink one. I have decided that she wears wigs because she hates going grey, which she has been doing since her late 20s. So she’ll have a chance to wear all of the fur wigs, as well as ones from my incoming swatches. Oooooh!!!

This entry was originally posted at http://modernwizard.dreamwidth.org/1435355.html. You can comment here, but I’d prefer it if you’d comment on my DW using OpenID.