I acquired a Zoloworld/Day2day 1:6 scale Grim Reaper action figure to use its skeletal body as a dead version of the protagonist of my upcoming series Zombieville. I have heard nothing about this figure, so I am providing a detailed review as a public service.

I got my Reaper from toynk on Ebay for about $66.00 including s/h. It came in simple black packaging. 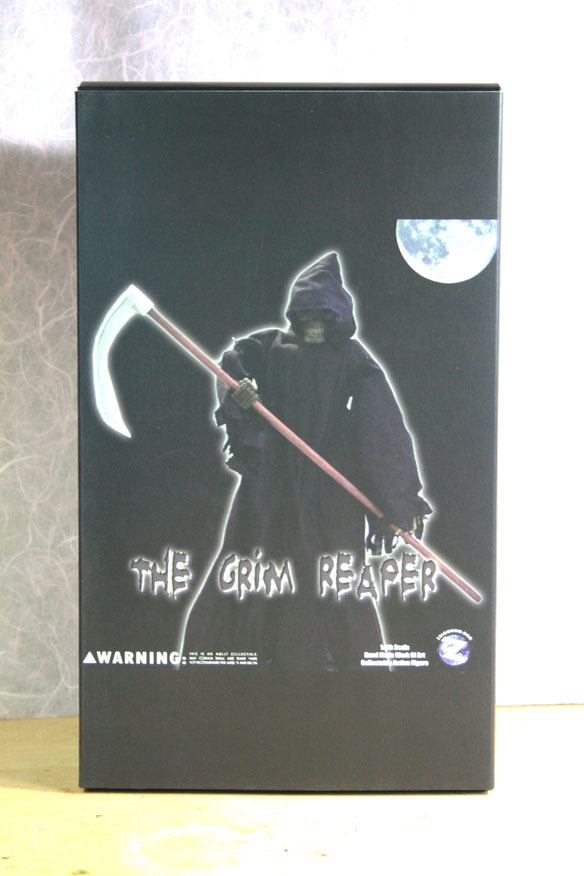 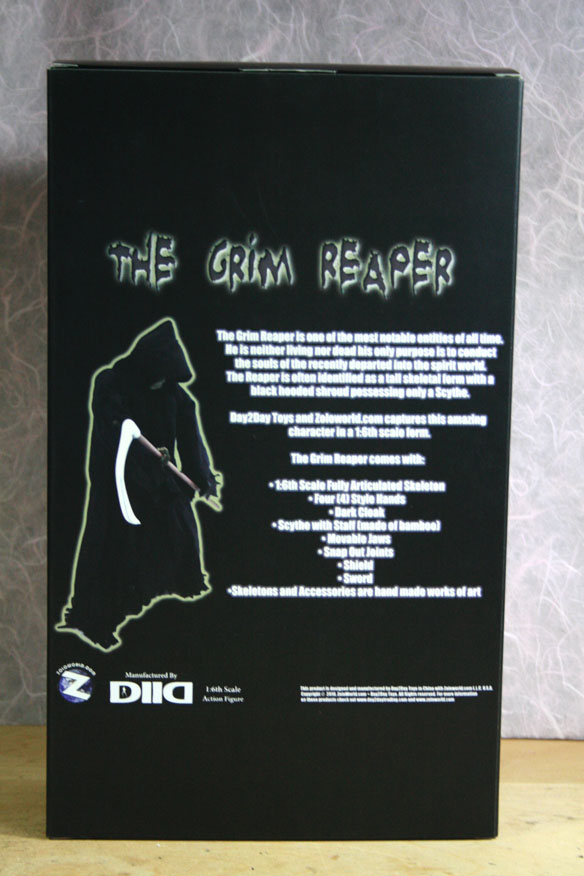 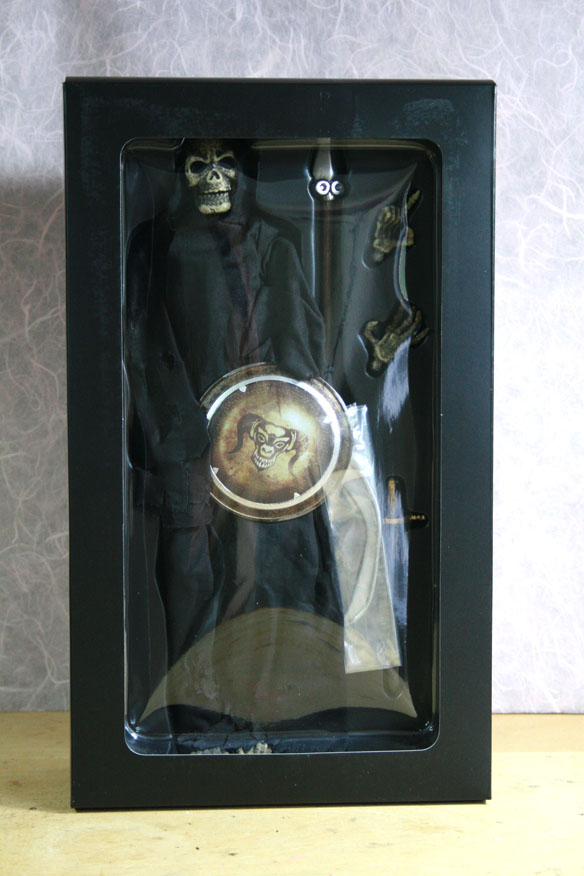 I noticed a few things upon removing the figure from the box. First, it’s a solid figure. Even though it’s a skeleton, with less material than a regular, full-bodied figure, it’s made of a weighty plastic with a pleasing heft and good balance.

Second, the figure is weathered with some sort of gritty combo of yellowish pigment and dirt. I can’t decide whether I like this. I like the effect, which suggests that the figure has been lying in the ground for a few years. On the other hand, the figure definitely feels dirty, and I wish that the same effect could have been achieved through judicious layered of paint, rather than gluing dirt [?] on it.

Third, the "dark cloak" does not have finished seams. It looks kinda cheap.

I popped off the shield hand, which was molded around the shield handle, and subbed in the open hand. Though the package says that the joints snap apart, the balls require some force to remove and then replace in the sockets, as the weathering scuzz provides lots of friction. 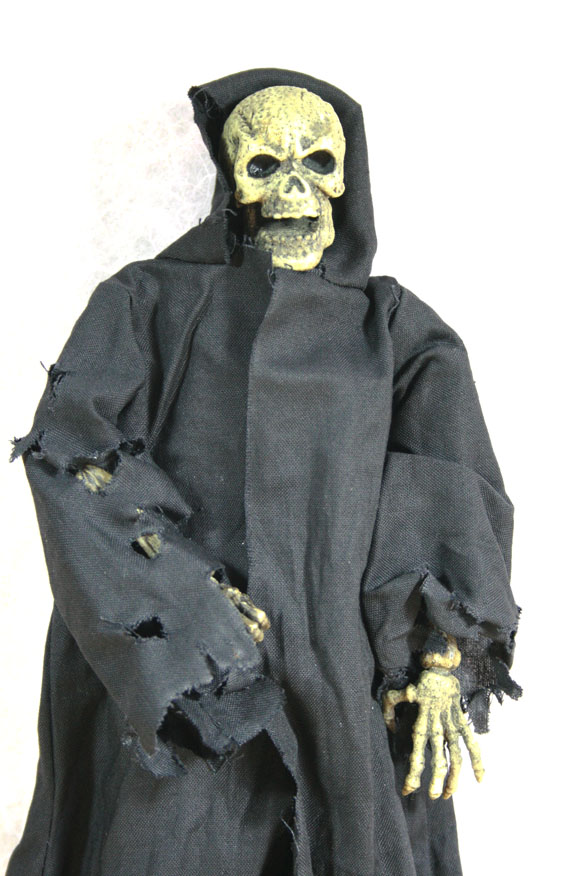 Now that the figure is naked, you can see a better representation of its coloration. The movable jaw looks better in concept than execution. Since it’s loose, the Reaper walks around looking a bit stupefied. 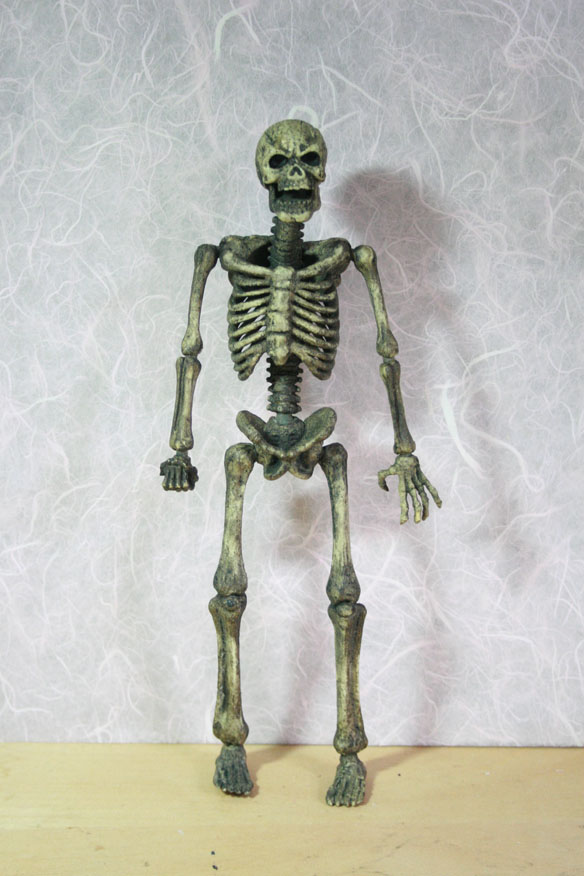 Overall I like the body sculpt. The hunched back, visible from the side view, gives the impression of a very old character. The large, flat feet stabilize the figure and allow it to stand unaided. 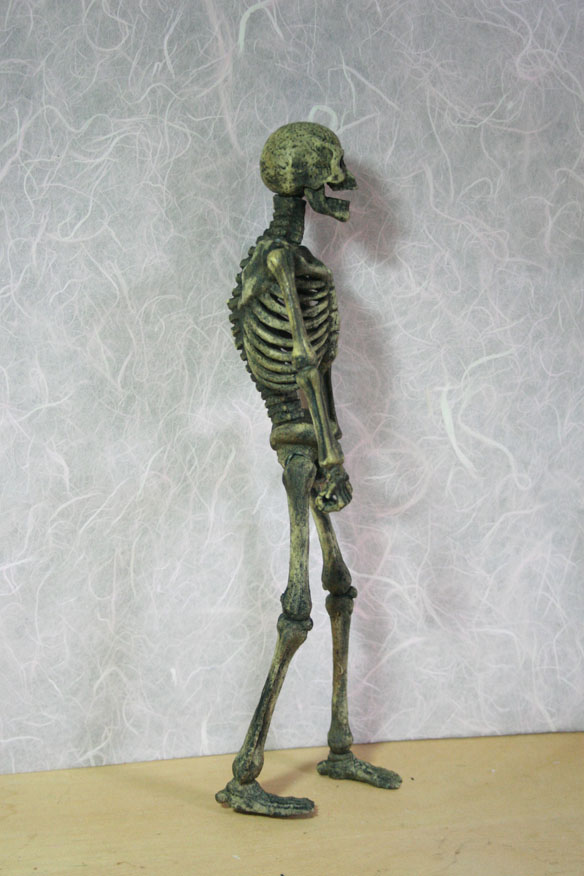 All the figure’s joints are ball in socket. The head swivels left to right and looks down dramatically, but not up. In the picture below, you can see how far out to the sides the arms and legs go…i.e., not very wide. 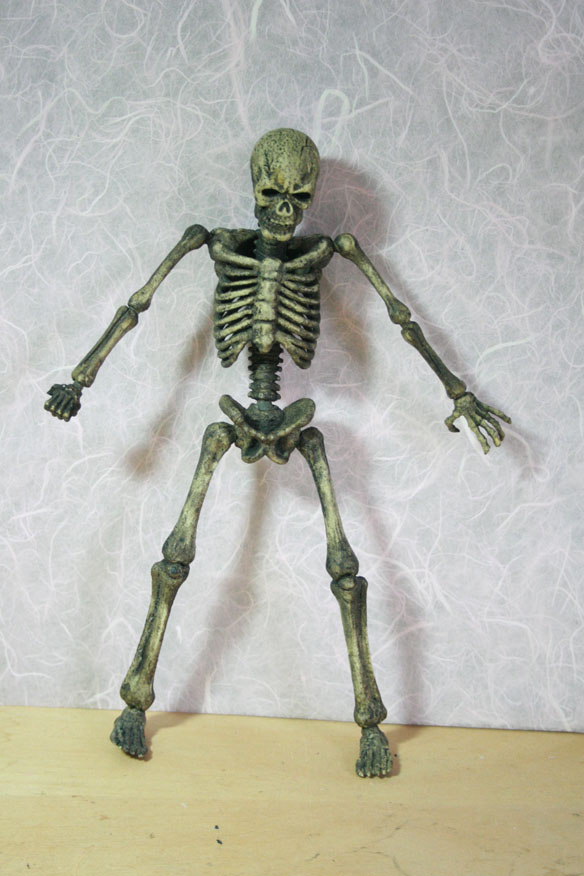 You can’t even get 90 degrees out of the elbows… 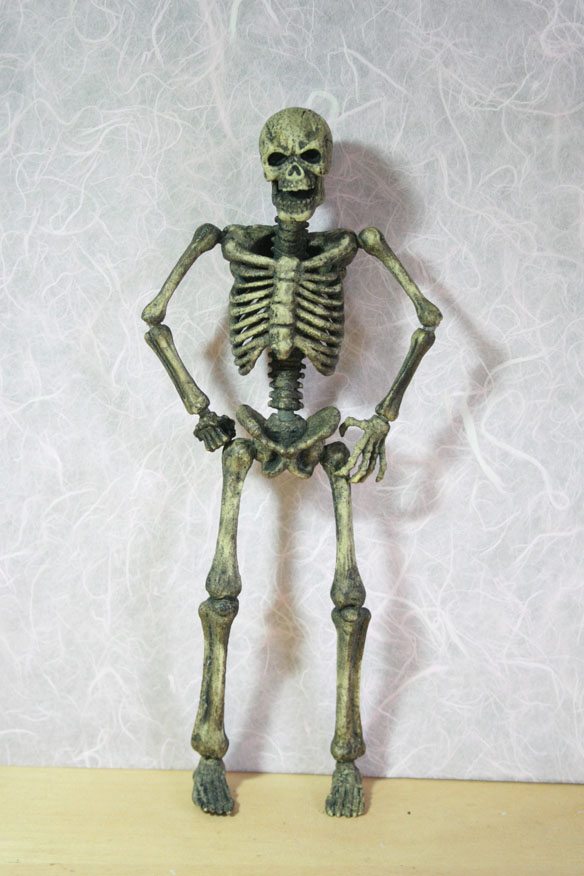 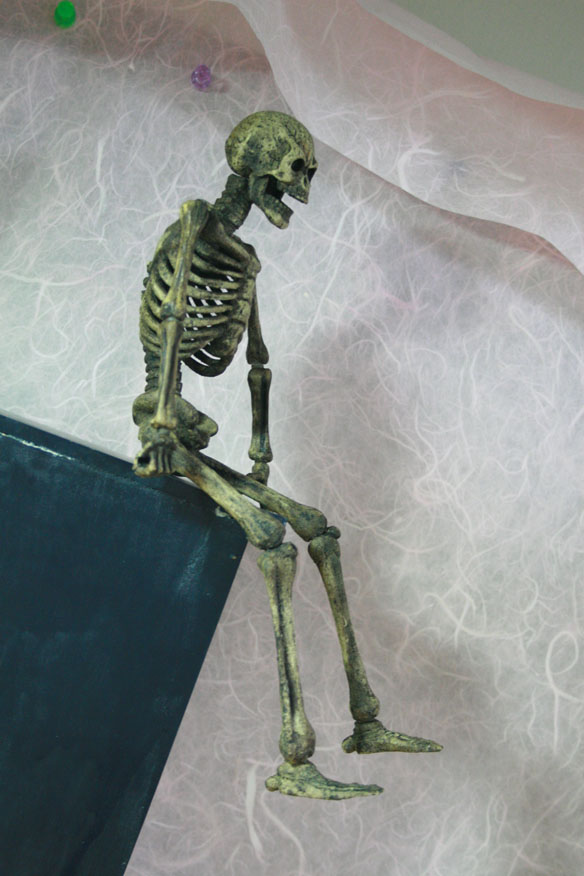 The spine is solid from neck to pelvis, where a ball joint allows some forward pivoting. 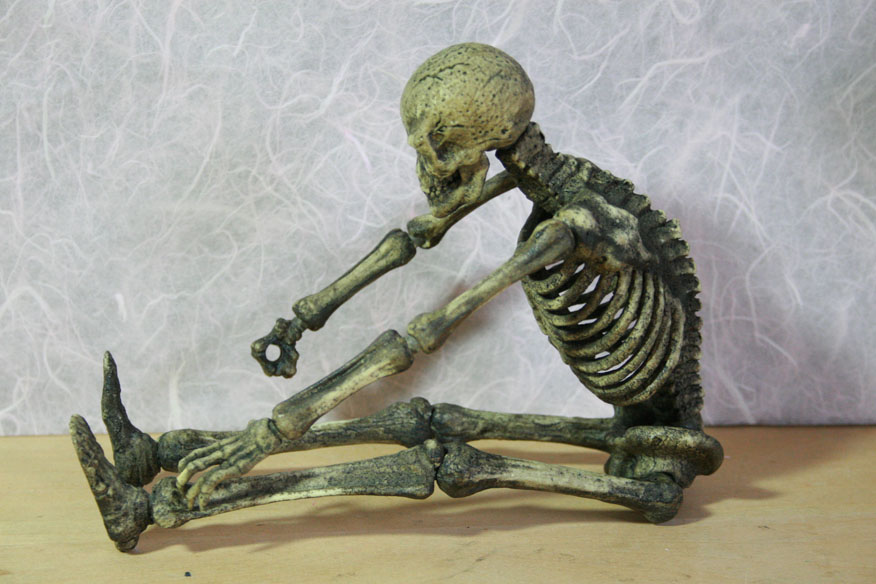 The supplied skull removes easily from the neckpost. It would be easiest to put heads on this body like those of female action figures or any male action figures without necks integrated into the headsculpts, though, in the latter case, you may need to bulk up the ball on the post. 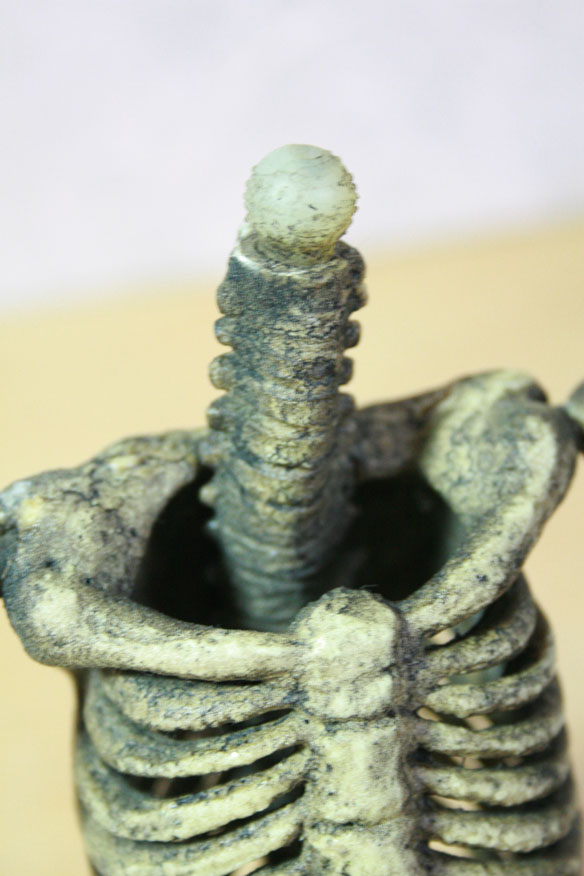 Since the figure lacked the poseability I required, I modded the shit out of it. I drilled channels in upper arms/forearms and thighs/calves, then glued plastic-coated wire in the channels, connecting the limbs back together. The figure can now pose more realistically. Some of the green wire that I used can be seen in the left knee. 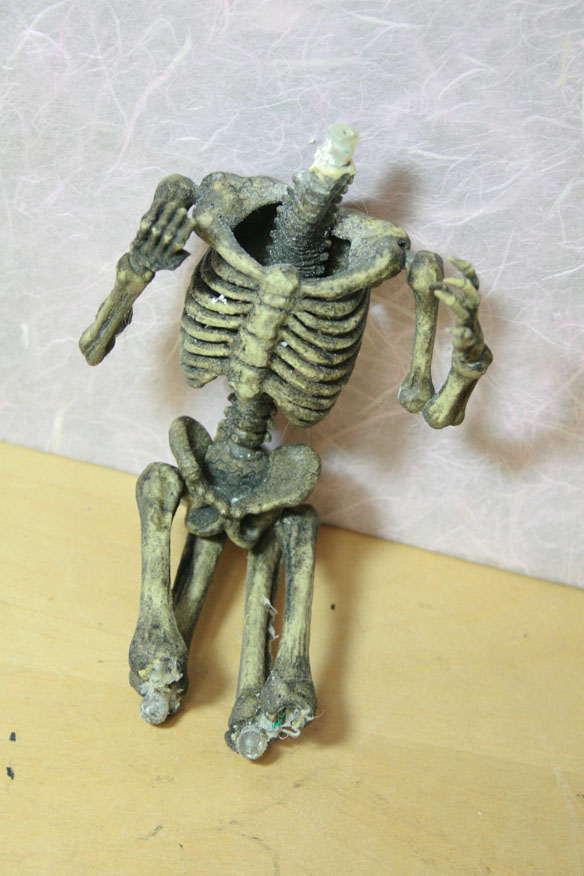 Hanging out casually, which it wasn’t able to do before. 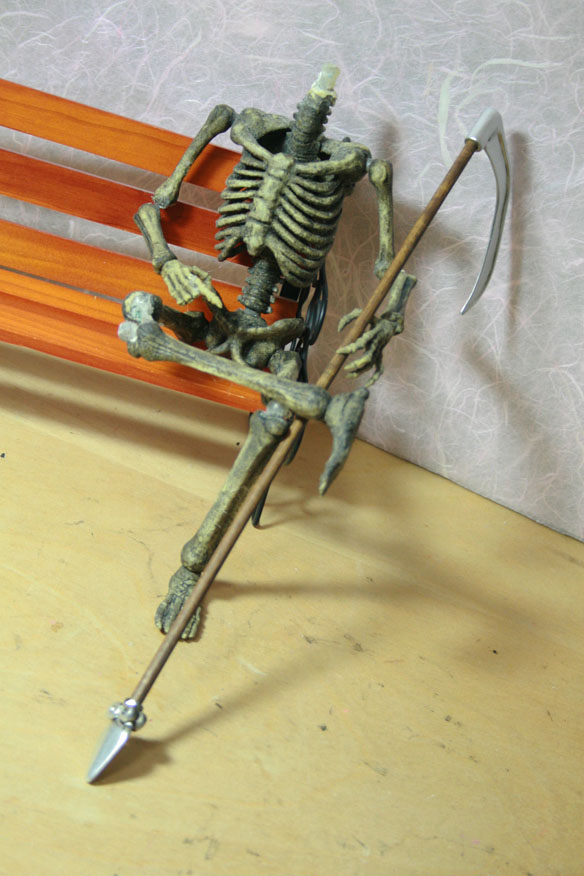 In summary, I do not recommend this figure at all. For $66.00, it should have double-jointed elbows and knees, like any standard action figure these days, and it shouldn’t be caked with scuzz. If you really need an articulated skeleton, wait for COO Models’ Death or their Skeleton Warrior, which are pricier, but more aesthetically pleasing and possessed of better articulation. All that being said, this figure will serve me fine as the body for a secondary character.

Here’s a preview of how I will use it below…. 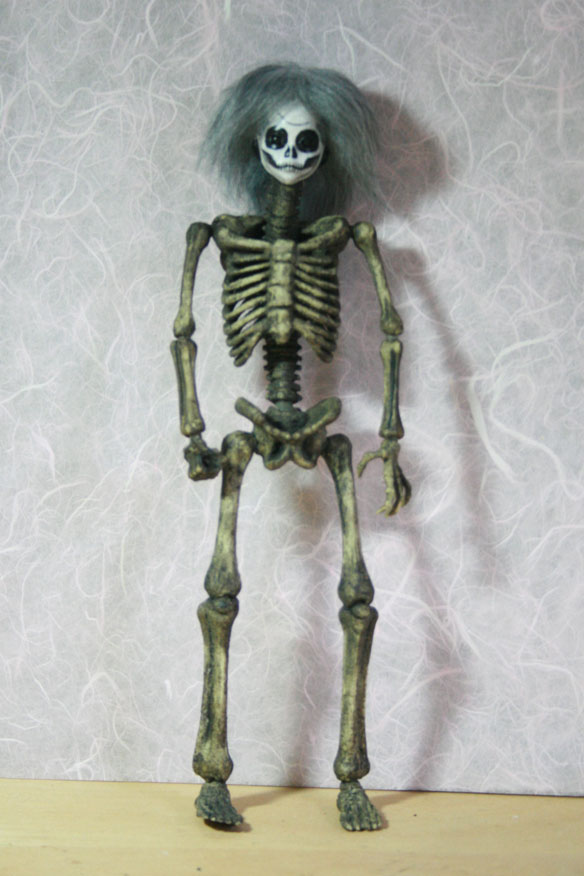 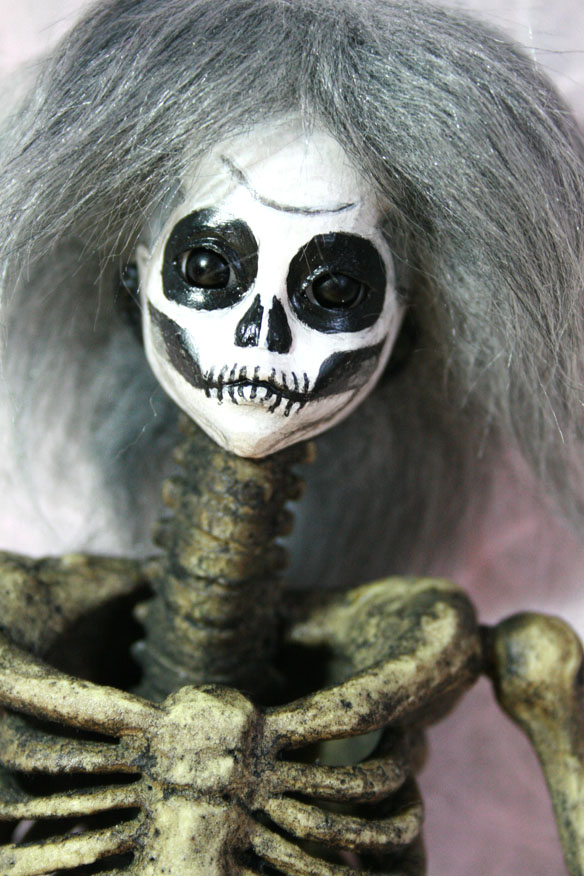 This entry was originally posted at http://modernwizard.dreamwidth.org/1518716.html. You can comment here, but I’d prefer it if you’d comment on my DW using OpenID.