One Zombieville set that I will greatly enjoy making is Isabel’s room, including her mess where she customizes dolls. The accessories for this set will be easy to furnish since I can use many of my own supplies for Isabel’s. See: 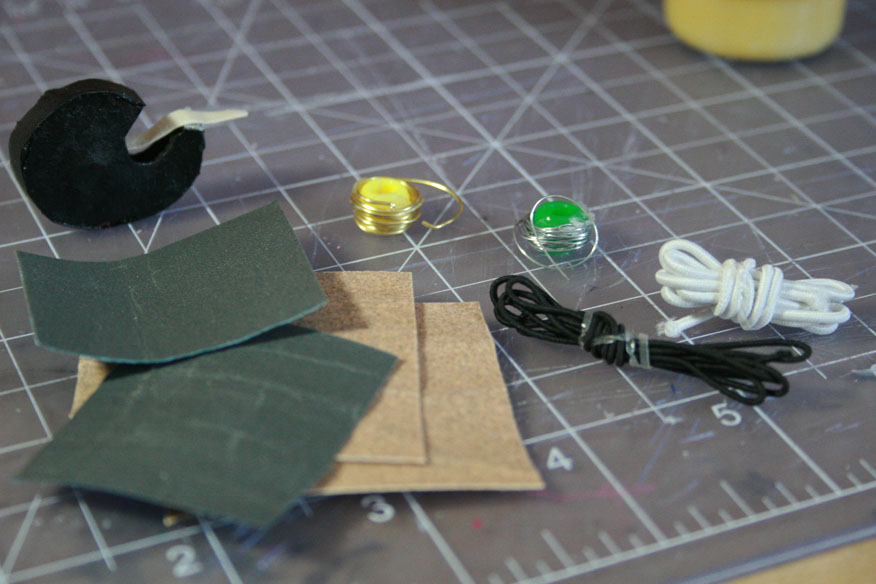 Sandpaper is small squares from my drawer, while elastic is from my cache as well. So is the wire, which I wrapped around 10mm pony beads for spindles and glued into place. 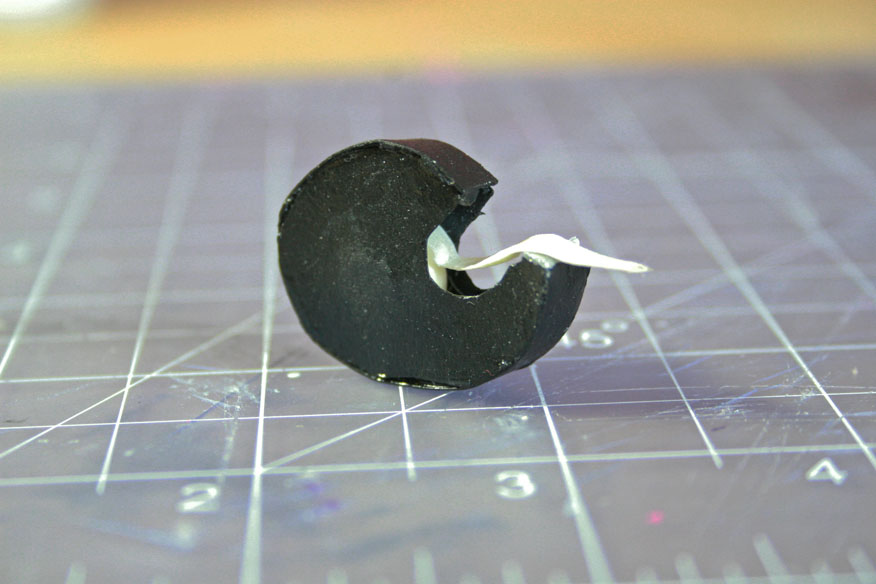 I made this tape dispenser about three months ago with a 10mm pony bead for a core, wrapped around with masking tape. I constructed the dispenser from manila folder painted black, black electrical tape, hot glue and lots of cussing. It was more of a challenge than I expected and rather unrewarding. 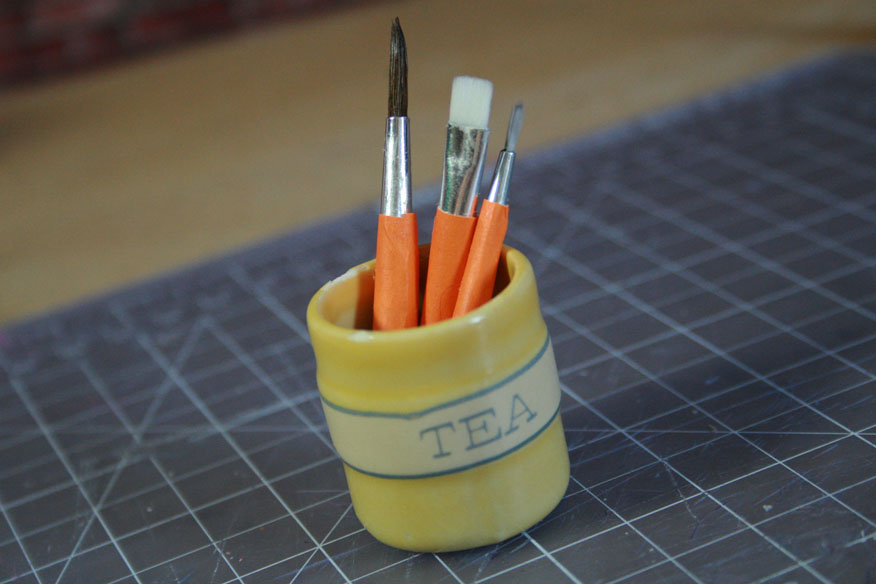 These brushes, on the other hand, proved ridiculously easy. I recently purchased a pack of two dozen cheap paint brushes, so I just cut some down and glued orange origami paper around them for handles. 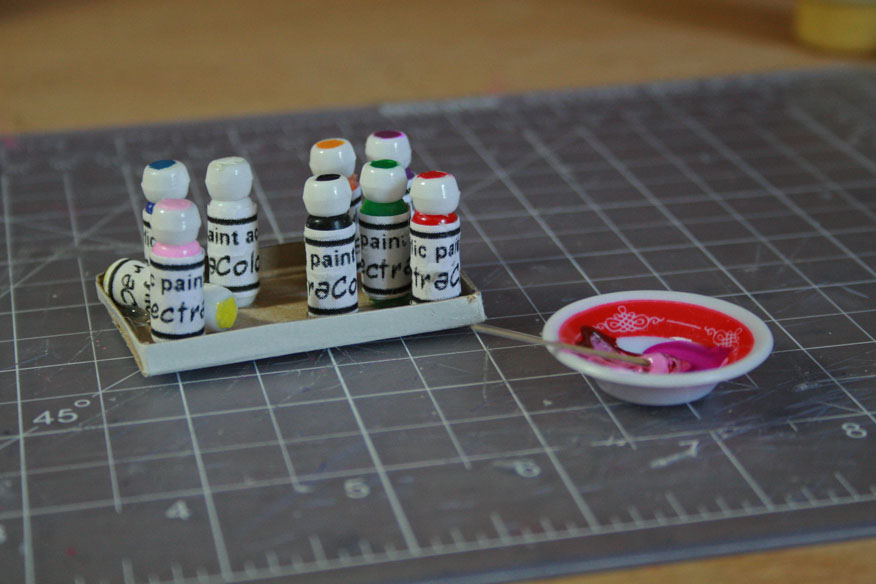 I had the most fun making Isabel’s paint-related mess. Like me, she mixes paint in excessive amounts, so I whipped up some partly mixed paint in one of the many 1:6 scale bowls I have, then stuck a thin strip of cardboard in it for a stirring stick. 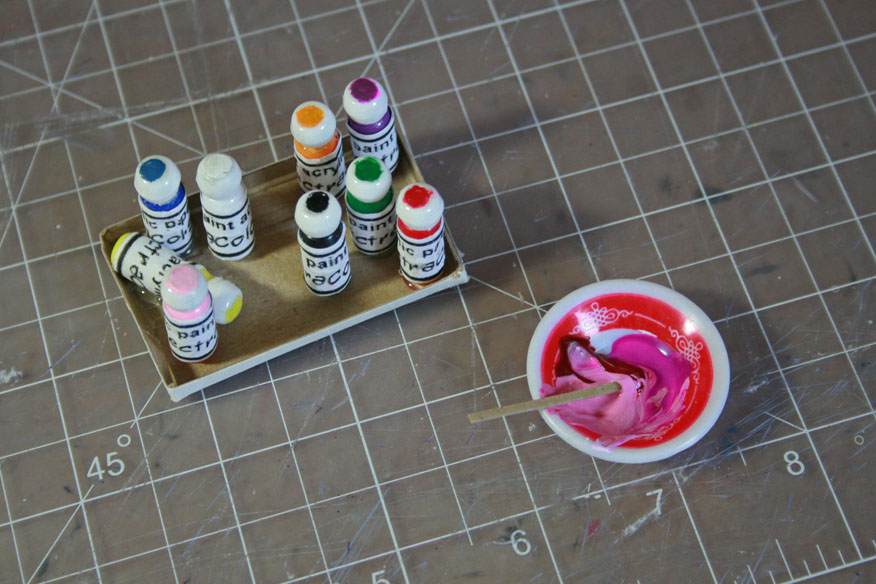 To make the paint bottles, I hot-glued stacks of three colored 10mm pony beads on a barbecue skewer, then capped them with white pony beads. I created a simple label in Photoshop, then glued it around each bottle with white glue. Finally I filled in the holes at the top of the white pony beads with Aves Apoxie Sculpt. Then I painted the Aves Apoxie fill-ins to represent which colors of paint the bottles held. I trimmed down the end of a soap box to make a cardboard tray, then hot-glued the paints into the tray. Looks good enough for me! 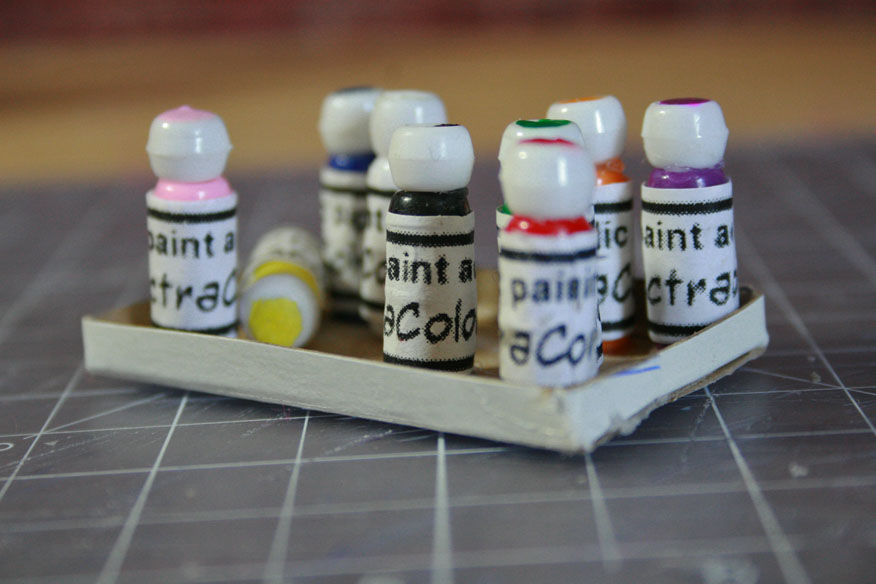 I also need to make Isabel a rotary tool…

This entry was originally posted at http://modernwizard.dreamwidth.org/1570003.html. You can comment here, but I’d prefer it if you’d comment on my DW using OpenID.